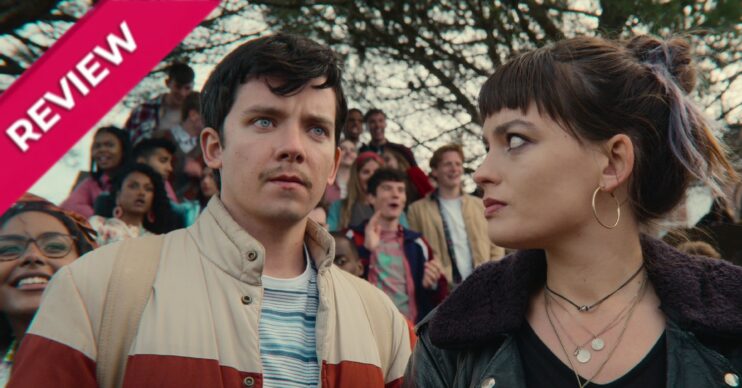 Sex Education season 3 review: Can Netflix favourite keep it up?

Sex Education season 3 is back with a literal bang – with a three minute-long sex scene to prove it.

Otis, Eric, Adam, Maeve and the gang are older but no less wiser when it comes to sexual relationships – and it’s about to get worse.

Following Moordale school’s X-rated Romeo and Juliet, there’s a new girl in charge in the shape of Hope (Jemima Kirke). She’s hip, she’s cool – and she’s about to ruin everything for everyone.

Meanwhile, Otis and Maeve are still figuring out where they stand with each other, and Eric and Adam are navigating their romance now Adam is willing to embrace his homosexual side.

Then there’s Gillian Anderson’s Jean – whose fabulous range of jumpsuits are now also home to a growing baby bump.

It’s all go from the start this series, which is not necessarily a bad thing. The show’s weird and wonderful world that’s slightly left of an actual reality allows the writers to bring in the absurd with the sweet and the sexual. They use this to their full potential this season.

This works both for and against the show as a whole, unfortunately.

There are moments in this season where the Sex Education characters just aren’t acting like actual human beings. Horrific moments aren’t caught on a camera phone. European school trips verge on the ridiculous. Character development they’ve spent years building is somewhat wiped out.

It’s when the show strips back the heavy-handed comedy that its true value shows itself. Adam developing his relationship with gay sex. Jackson finding romance with a non-binary pal. Aimee dealing with the long-term effects of a sexual assault.

When the show isn’t focusing on the farcical, it can actually be pretty beautiful.

There are some moments in Sex Education season 3 that are sure to be massive fan pleasers. And despite the criticism of the way its comedy swings, the show continues to be a tour de force with no real competitors.

This is teenage sexuality, and sexuality in general at its most raw. And fans won’t be disappointed.

Sex Education season 3 is full of fan service for the devoted viewer – but it’s to its credit as well as its detriment.

They’re pushing their limits, but Sex Education provides a world that lets them get away with it.

But unlike the pitch-perfect second season, this time around there are moments the show stumbles. Jemima Kirke’s headteacher Hope feels like a plot that doesn’t achieve its potential. In fact, it’s not entirely clear what they want to do with her.

Ultimately, it seems like the endgame is in sight for this sex-positive series. We reckon after season four they might be ready to say goodbye to the gang.

But it’s nice to have them around for now.