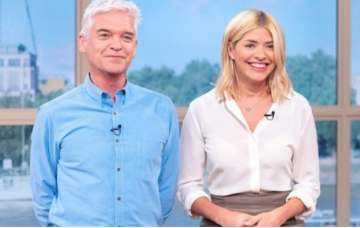 How is the view so realistic?

As Holly Willoughby and Phillip Schofield gave viewers a tour of the new This Morning studio on Monday, Phil pointed out, “you shouldn’t really be able to tell any difference.”

He was absolutely right as, from the position of the kitchen to the decor and the sofa, everything looked like it had before.

Amazingly, the presenters also still had a view of the River Thames behind them, despite their new studio being away from the waterside in White City, West London.

“We brought the view with us,” Phil said. “We couldn’t leave that behind,” Holly added.

So how did they do it? Well, the realistic look of the backdrop is all apparently thanks to computer trickery.

A source told The Sun the backdrop will continue to look real throughout the seasons as the show’s technicians can change the image to reflect the actual weather outside!

A source explained: “It was filmed throughout the seasons and looks really authentic. Everyone has been so positive about it, it’s been brilliant.”

The paper reports that the show captured the view every day for a year, so they’ll have the relevant image to project in the future come sun, rain or even snow!

Viewers praised the new set after it was unveiled for the first time on Monday – and were particularly pleased that the view of central London remained.

“What a great job you’ve done “taking the view of #ThisMorning studio with us by the magic of television” as promised!!! Looks fab, shiny and new!” wrote one.

This Morning is one of a number of ITV shows to move into the BBC’s Television Centre while their old South Bank facilities are renovated.

Lorraine, Loose Women and Good Morning Britain all have new studios at the location, which will be their home for the next few years.

An ITV spokesperson said the makeover is set to create: “A purpose-built HQ on our South Bank site, bringing together all of our London-based stuff in one location for the first time.”

What do you think of This Morning’s view? Leave us a comment on our Facebook page @EntertainmentDailyFix and let us know!