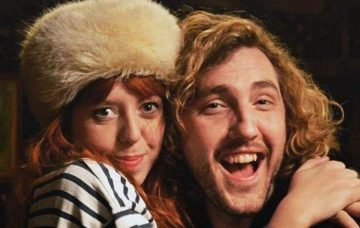 He was caught kissing his Strictly partner Katya Jones

The actress and beauty blogger has also vowed never to speak to Seann, 33, again after he publicly humiliated her when pictures emerged of Seann and Katya kissing after a night out.

Rebecca has insisted the scandal has only made her stronger, although has confessed the failed relationship has given he trust issues.

She told Grazia magazine: “I am getting on with things but when it comes to dating, it will be tricky to trust anyone again. Still if it takes seeing a therapist to help me learn how to do it, I’ll do it; I’d rather find a way through this and be able to live my life again.”

Rebecca, who reached out to Lisa Armstrong on Twitter following her own break-up with Ant McPartlin, insisted she would never speak to the comedian again.

She added: “Seann and I haven’t stayed in touch – and we won’t ever be in contact again. There’s a wall between us, and that’s been really important.”

The couple had been dating for five years until Seann kissed Katya, who is married to fellow Strictly professional Neil Jones, on a night out – which also happened to be Rebecca’s birthday.

While Seann branded the kiss “a mistake”, he then went on to mock Neil in his stand-up routine joking that the professional dancer was “gay”.

Fans rallied around to support Rebecca when the news first broke and she confessed that not only was she “blown away” by the support, but that she may not have realised his behaviour was “unacceptable” if it wasn’t for them.

After the pictures emerged, Rebecca dumped Seann by posting a message on Twitter in which she claimed she had suspicions that he had been cheating on her for weeks, but he had branded her a “psycho” and accused her of being “nuts” when she brought it up.

She also claimed neither Seann or Katya had personally apologised to her.