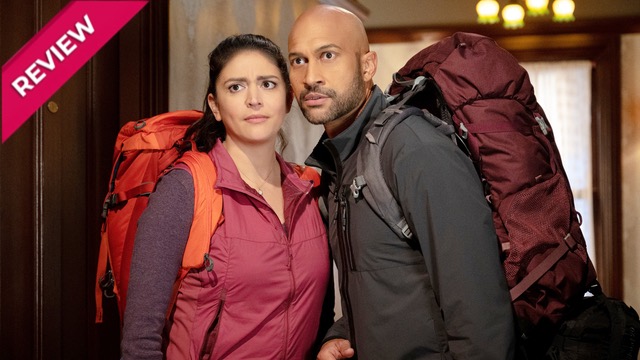 Schmigadoon! review: Is Apple TV+ musical worth the song and dance?

Cecily Strong and Keegan Michael-Key are trapped in a 50s musical in this new comedy.

The Saturday Night Live team is taking us on a song and dance trip down memory lane with new musical Schmigadoon!

Cecily Strong and Keegan Michael-Key star in this sitcom as Melissa and Josh – two doctors whose love story has hit a crossroads.

On a camping trip to get the spark back in their romance, the pair accidentally stumble upon Schmigadoon! – a literal real-life 1940s musical town.

Unfortunately, the full group musical numbers and bizarre housing that looks oddly like a set on a lot in the middle of Los Angeles is just the start of their problems.

As it turns out, they’re stuck there.

Trapped by a magical curse, they can only leave when they find true love.

… Consequently, seeing as they can’t leave, it means that’s probably not with each other.

Kristen Chenowith also stars as the bitter old crone who doesn’t take too kindly to the newcomers, and Aaron Tveit is the handsome carnival owner with a song in his heart.

But can Melissa and Josh find the song in theirs before it’s too late?

Schmigadoon! brings the Golden Age of movie musicals into a 21st-century world and never once loses its heart.

It’s clear that the team behind the show has a true love for the films they’re sending up.

As a result, Schmigadoon achieves a seeming rare feat in modern-day parody. It makes you love the actual story while acknowledging it’s crafted out of satire.

Seven Brides for Seven Brothers. The Sound Of Music. Singin’ In The Rain. They all get a lovely little nod here in some way.

So anyone who has a soft spot for a good musical will truly enjoy these three hours.

Is Schmigadoon! worth the watch?

Schmigadoon! is a hell of a lot of fun and an absolute love letter to the musicals of years gone by.

Blending the joy of the Hollywood classics without shying away from the parts that haven’t aged as well, the show is a perfect binge-watch.

Therefore it’s a bit of a shame that this comes out in installments rather than in one go. But hopefully, it won’t take away too much of its spark.

Ultimately, while some repeated jokes run a little thin towards the latter end of the series, Schmigadoon! knows its beauty and as a result sucks you in.