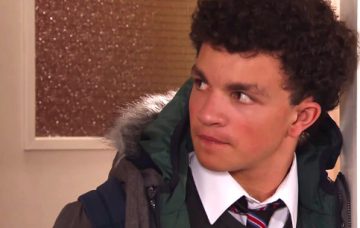 Hi blackmail attempt did not go down well

He’s been rubbing people up the wrong way on Coronation Street for a while now, and it seems that viewers have had enough of Simon Barlow.

Then, earlier this year he was part of a dodgy gang who attempted to mug street favourite Audrey Roberts, landing her in hospital.

Prior to all of that, he’d violently attacked his stepmother, Leanne, too.

So it’s perhaps in keeping with his character that he was up to no good again on Friday night’s episodes of Corrie.

It all started when Toyah noticed that £20 had mysteriously gone missing from her purse.

She suspected that Simon could be involved with the theft straight away, but decided to keep quiet initially to avoid an argument with Peter.

The story came out later on though, and Peter made the unusually responsible decision to tell Leanne and confront Simon together in order to hear his version of events.

That didn’t exactly go according to plan and not only did Simon completely deny taking the cash, but he even did his level best to make his dad and step-mum feel guilty for even suggesting he was behind it by turning on some fake tears.

Things got even worse later on when everyone gathered to say goodbye to Eva Price who decided it was time to head off to her ‘course’ in ‘America.’

Of course, viewers know that she’s actually headed to a secret location in order to have her secret baby, and Simon let Toyah know that he knew what was going on with the baby deal between her and Eva.

He told her that he’d reveal all if she didn’t tell Peter that she’d found the £20, leaving Toyah gobsmacked.

Viewers were unimpressed to say the least and quickly took to social media to let the world know what they thought of young Simon’s scheme.

“Don’t like simon now he’s turned into some kind of devil child,” ranted one angry viewer.

“Simon Barlow is going to make my blood boil even more than Pat Phelan,” fumed another.

A third added: “Stupid Simon the evil little idiot missed a trick there he could have blackmailed Toyah – evil child.”

And a fourth commented: “Peter set Simon up and trap him!”

You know things are bad when Corrie fans compare you to Pat Phelan and while it may only be £20 for now, we’re worried about where this one will go!

What do you think of Simon’s behaviour? Leave us a comment on our Facebook page @EntertainmentDailyFix and let us know what you think!