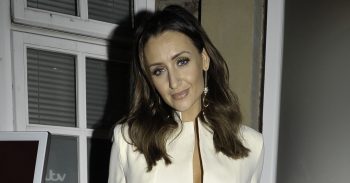 The creator of long-running ITV sitcom Benidorm has another comedy series in the works.

Screenwriter Derren Litten’s new six-parter for the BBC, Scarborough, has a number of big names attached to it. Here’s what we know so far.

What is Scarborough about?

Set in the North Yorkshire seaside town of Scarborough, the show follows the lives and loves of a handful of locals with a penchant for karaoke.

Nearly-40-somethings Mike and Karen decide to give their relationship another go after splitting up years before.

“But will the course of true love run smoothly for the couple the second time around, or will the trials and tribulations of their lives get in the way?”

Scarborough features a raft of faces we’ve seen before.

Jason Manford, one of Britain’s biggest comedians, will star as Mike. It follows his brief appearance in Benidorm as Andre.

Starring alongside Jason is Catherine Tyldesley of Coronation Street fame.

What do we know about the production behind Scarborough?

A BBC Studios comedy production, Scarborough will be directed by Derren Litten and produced by Gill Isles.

Speaking when the series was confirmed last year, Litten said: “I am so thrilled to be back at the BBC and with a show I am so passionate about.

“After 10 years of Benidorm I really do think Scarborough is going to surprise a few people and in very good way.”

When does Scarborough start on BBC One?

Filming on Scarborough started on April 15th, which means it will be some time before the show hits our screens. There’s no release date as yet.

In a BBC preview, Derren Litten said: “Even though I’ve stuck close to themes I clearly love (the seaside, pubs and karaoke!), Scarborough is unlike anything I’ve written before.

“I’m genuinely flattered by the calibre of actors my scripts have attracted and I can’t wait for BBC audiences to get caught up in the laughter, love and intrigue I’ve created all set against the backdrop of this beautiful North Yorkshire fishing town.”

Are you planning to watch Scarborough? Leave us a comment on our Facebook page @EntertainmentDailyFix and let us know.