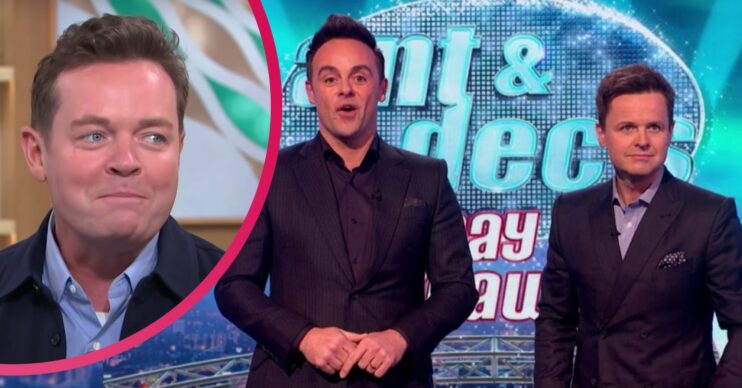 Not been on social media, either

The Catchphrase presenter, 44, is a regular presence on the ITV series. However, Stephen has not featured on the show for two weeks.

Indeed, while he appeared on the first show of the series on February 19, many fans have been wondering where he’s been since.

Going by his Twitter and Instagram accounts, Stephen may be taking a social media break at the moment.

That’s because he hasn’t made any new posts on either account since February 19, either.

The most recent content he shared on both pages concerned an ad for the National Lottery.

But immediately previous to that, Stephen’s posts were about SNT.

On Twitter he shared images of himself with hosts Ant and Dec as they rehearsed together.

And on Insta, Stephen uploaded a post showing himself in various costumes he has worn for the show.

He captioned the post, ahead of the start of the new SNT series: “Here we go again, let the madness begin.”

Earlier in February, Stephen appeared on Sunday night telly as he filled in for Phillip Schofield on Dancing On Ice.

How have fans reacted?

Baffled fans have expressed their concerns for Stephen on social media, both during and after the programme last night (March 5).

Another said: “Where is Stephen? Second week running and no Mulhern? He really makes the show.. not the same without him,” followed by a sad face emoji.

Another asked Stephen on Twitter: “Where are you @StephenMulhern @itvtakeaway miss you being on the TV, hope you are ok.”

Where is Stephen Mulhern?

Another person asked: “Where is Stephen? He hasn’t been on for two weeks nor been on Twitter, really hope he is OK! #SaturdayNightTakeaway.”

And among the deluge of comments demanding to know more, someone else fumed: “Where the hell has Stephen Mulhern been the last two weeks? This show is nothing without him #SaturdayNightTakeaway.”