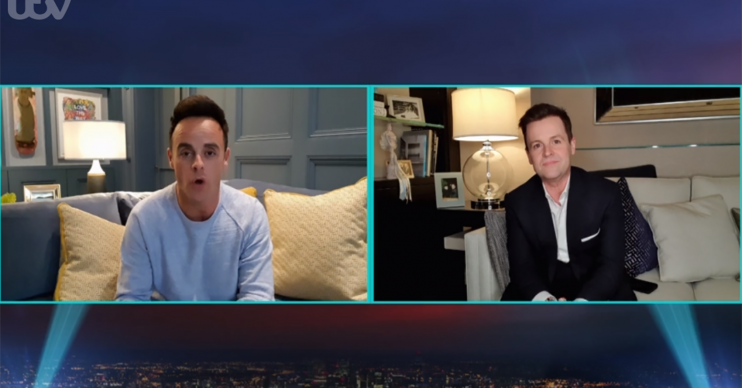 It comes amid the coronavirus pandemic

Ofcom are deciding whether to investigate Saturday Night Takeaway after an “infecting humans” joke.

On Saturday night’s episode (March 28), hosts Ant McPartlin and Dec Donnelly made the jibe during their Men In Brown sketch.

The sketch saw the Geordie duo try and uncover which celebrity was actually an alien infecting the human race with the “squits”.

In the sketch, the aliens were seen chanting: “Infect the human scum.”

However, amid the coronavirus crisis, some viewers thought the joke was insensitive.

Ofcom confirmed it received 29 complaints about the episode – which included 22 relating to the sketch.

We are assessing the complaints against our broadcasting rule.

Six were about Ant appearing to push his dogs off his sofa. while one complaint was about scenes of people licking their fingers.

An Ofcom spokesperson told Metro.co.uk: “We are assessing the complaints against our broadcasting rules, but are yet to decide whether or not to investigate.”

It comes after viewers voiced their outrage over the joke on Twitter.

One person said: “Rather an unfortunate subject matter on #MenInBrown. Infect the humans?”

Another wrote: “@antanddec on reflection do you think maybe that last sketch was slightly inappropriate in the current climate ‘infect the human scum.'”

One tweeted: “Infect the human scum, is that appropriate?”

Rather an unfortunate subject matter on #MenInBrown. Infect the humans?#SaturdayNightTakeaway

However, others defended the joke and insisted it could have been filmed before the coronavirus outbreak.

One said: “People are complaining about ‘infect the human scum’ line from Men In Brown sketch. Really? It was filmed months ago!”

Another insisted: “People crying about using the phrase ‘infect the human scum’ need to get a life.

“It’s about aliens for Christ’s sake, filmed months ago, and it’s light-hearted fun.”

A third added: “Are people actually moaning about the ‘infect the human scum.’ When this was filmed months ago.”

Are people actually moaning about the "infect the human scum" 🙄

When this was filmed months ago.#SaturdayNightTakeaway

On Saturday night’s show, Ant and Dec hosted from their houses to follow the government’s guidelines to social distance.

Dec explained why they were hosting from their houses at the start of the show.

He said: “For obvious reasons, we’re presenting this week’s show from our houses. But reassured there will be no dropping of our normal standards.”

What did Ant say?

Ant explained: “For the next 60 minutes, we’re hoping to put smiles on your faces with the help of classic moments from the show plus the final of Men In Brown.”

Did you complain about the joke? Leave us a comment on our Facebook page @EntertainmentDailyFix and let us know.