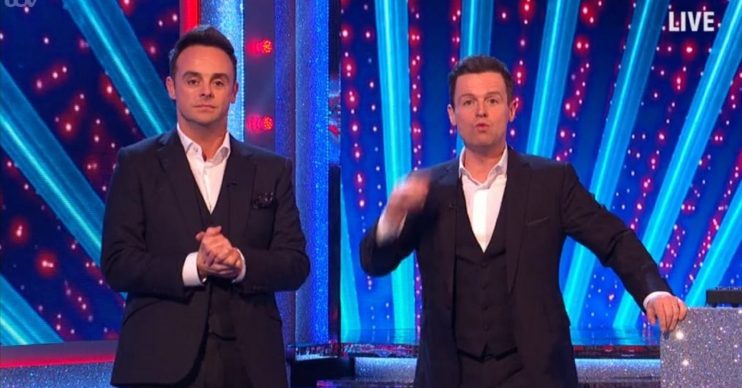 Last night's show went out with an empty studio

Last night’s Saturday Night Takeaway with Ant and Dec made history as the first one ever with no studio audience – and thanks to coronavirus, the live show next weekend has been cancelled.

Instead, the Geordie duo will pre-record the rest of the series, as they announced last night.

The pair had told This Morning viewers on Friday that this weekend’s show could be the last for the foreseeable, as they set about recording it in an empty studio.

Ant said they wanted to still “put a smile on other people’s faces” at uncertain times for the nation. They were unsure if it was still going to be possible to produce Saturday Night Takeaway as guidelines regarding social distancing and self isolation seemed to constantly change.

But the decision was made for the Saturday show to still go out, only it will be prerecorded for the first time ever.

The bombshell was dropped at the end of the show last night.

Saturday’s show took place almost as normal, with Ant jokingly pushing a button for audience applause as the presenters could no longer depend on the real thing.

After Olly Murs closed the show with a rendition of his hit ‘Dance With Me Tonight’, Dec said: “We will be back next Saturday at 7pm, we wont be live but we will be here with the finale of Men In Brown!”

Men in Brown is a regular skit where Ant and Dec try to figure out which one of their friends is secretly an alien.

Saturday Night Takeaway was praised for entertaining the nation last night at a time when the coronavirus pandemic has meant laughs are harder to come by.

Rehearsals earlier took place over the internet as the team behind Saturday Night Takeaway attempted to follow social distancing guidelines.

We’re pleased to see the show go ahead as long as Ant and Dec can manage to record it without risking themselves or anyone else.

What did you think of Saturday Night Takeaway? Are you relieved it will still be going out on our screens during the pandemic? Head to our Facebook page @EntertainmentDailyfix and leave your comments.