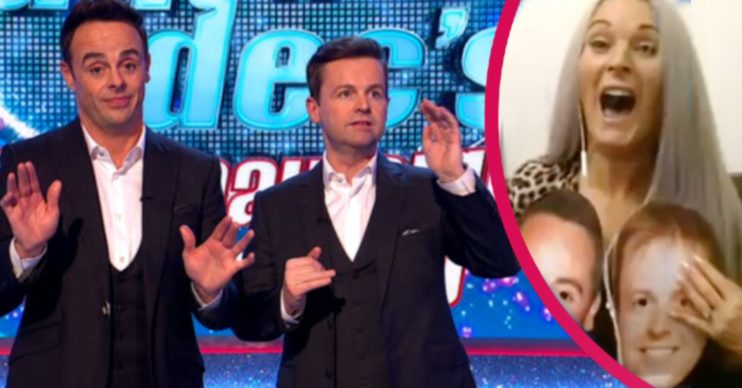 Win the Ads contestant cracked up viewers with her antics

Saturday Night Takeaway fans were in tears of laughter last night (March 20) after presenters Ant and Dec warned an excited competition winner not to flash her boobs live on air.

The hilarious moment came after the woman called Fiona – appearing on Zoom – scooped a bundle of prizes in the show’s Win the Ads segment.

As she pretended to lift her top, the two Geordie stars begged her not to, before quickly moving on to another part of the show.

And the moment went down a storm with viewers, many of whom took to Twitter to pass comment.

What happened on Saturday Night Takeaway?

The incident occurred after Fiona was asked how many Grammy Awards Beyoncé has won.

There was a lot riding on the question – if she answered correctly, she would win a car, a holiday and a sofa set.

Sitting in her lounge at home in York, she grabbed two Ant and Dec masks that were lying next to her and screamed: “28!”, before jumping up and down with joy.

As the studio erupted with fireworks, Ant McPartlin shouted: “Oh my God – I didn’t think you could get any more excited, but you can!”

Fiona then kissed the two masks and placed them on her breasts, prompting Ant to joke: “The perfect place for Ant and Dec.”

But shortly after, Ant and Dec were sent into a spin as the mum went to lift up her leopard-print top.

How did Ant and Dec react?

Dec yelled: “Leave it!”, before Ant butted in: “Listen, we’ll leave it there because this could get dangerous.”

One viewer laughed: “Just when you think the last year can’t get any weirder, you see a woman from York staring down the lens of a Zoom call on live TV, having just won loads of prizes, gesturing to flash her boobs to the nation.”

Another addressed Ant and Dec, saying: “You really thought she was going to flash them didn’t you! Hahaha I could see the panic.”

A third added: “The fact she was tempted to flash live on ITV at 8pm is an absolute power move!”

Listen, we’ll leave it there because this could get dangerous.

And another viewer chuckled: “Fiona is absolutely hilarious – going to break her neck in a minute.”