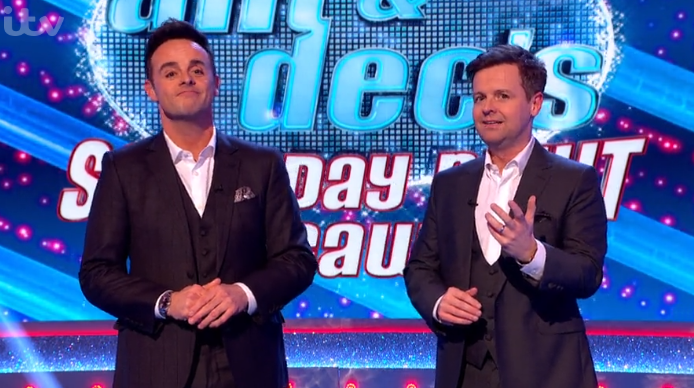 People could be off work self-isolating because of Covid-19

Viewers of Saturday Night Takeaway were left scratching their heads as the show held a contest to win a week off work amid the coronavirus outbreak.

The rather oddly-timed segment saw presenter Stephen Mulhern setting workers a series of challenges, with the winner being rewarded with a week off.

But as the spread of Covid-19 means many people are working from home or face self-isolating, viewers thought the competition was a bit strange.

Looking like tools to win a week off work? Yeah sure. #SaturdayNightTakeaway pic.twitter.com/iEzoEWYger

Another viewer suggested that instead of taking part in the contest “you could just sneeze at work Monday and get two weeks off”.

“Winner will be all the UK soon,” said another viewer.

The ITV show went ahead as usual on Saturday night (March 14), with hosts Ant McPartlin and Declan Donnelly assuring fans that it was “business as usual”.

They said in a post on Twitter that would be the case “for as long as we are able and allowed”.

On our way in to prepare your #SaturdayNightTakeaway for tonight. We’re business as usual and will be for as long as we are able and allowed. We’ll do our best to bring you a few smiles. See you on the telly!
D

Their message came after it was confirmed that the series finale in Florida has been cancelled.

There had been plans to fly 300 fans to the Walt Disney World Resort for the climax of the series on April 4, as part of the Place on the Plane competition.

But that plan was put on hold as a result of the coronavirus pandemic.

ITV said in a statement: “We will no longer be broadcasting the Saturday Night Takeaway finale from Walt Disney World Resort in Florida.

“Walt Disney World has made the decision to close, beginning on Monday 16 March until the end of the month.

“The well-being of all our prize winners, as well as our production team, is always our number one priority.”

The statement said that all recipients of a Place on the Plane prize would have their prizes honoured, and would be flown to Walt Disney World Resort for a five-night stay at a later date.