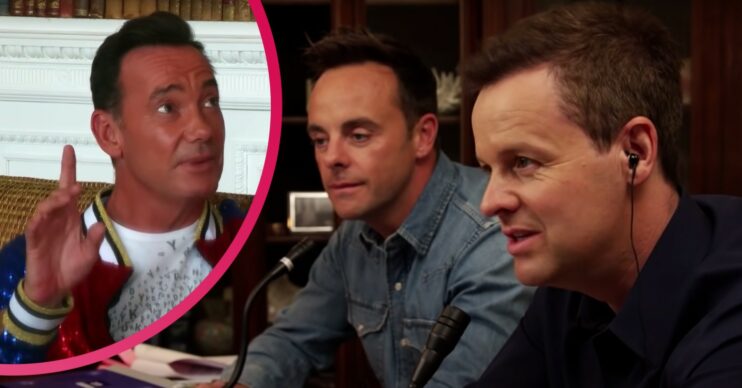 Would you give the Strictly judge's performance a 10?

The Strictly Come Dancing judge, 57, teamed up with Ant and Dec for the Get Out Of Me Ear prank skit.

Viewers at home were so impressed with Craig in his role they described him as “fab-u-lous”!

Craig wasn’t the target for the show’s regular sketch. But he was more than game for a laugh as he played along, chatting with wedding planners.

With Ant and Dec in his earpiece directing him, Craig fully committed himself to several ludicrous set ups.

These included jumping out from behind a sofa and breaking a supposedly-antique vase at the stately home where he met the planners.

Craig also performed what he claimed would be his wedding vows – the lyrics from the Home & Away theme tune.

However, it seems Craig didn’t hear all instructions relayed to him.

That’s because he made references to “fidget smithers” and his hamster ‘sneezing and turning himself into a rat’.

Eventually, Craig, Ant and Dec revealed their daft wind up to each of the three wedding planners, taking the prank in good humour.

Going by the reaction online, they weren’t the only ones to rate the segment…

SNT fans were in raptures over the sketch – and indicated on social media how hysterical they found it with a deluge of crying laughing emojis.

Good lord. I was crying with laughter during @CraigRevHorwood’s ‘I’m a celebrity get out my ear piece’ was beyond hysterical. So so good! Absolutely brilliant. Thank you @antanddec. #SaturdayNightTakeaway pic.twitter.com/MvZ87WJuKa

Another Twitter user agreed: “Craig Revel Horwood doing Get Out Me Ear is just brilliant I’m crying with laughter #SaturdayNightTakeaway.”

“Well done to @CraigRevHorwood on #SaturdayNightTakeaway. I wouldn’t have been able to read the Home & Away vows without crying with laughter,” said another.

And a fourth made use of Craig’s catchphrase, congratulating all involved: “Oh man @CraigRevHorwood was fab-u-lous darling on @itvtakeaway.

“Well done @antanddec I was crying I laughed so hard #SaturdayNightTakeaway.”

Ant & Dec’s Saturday Night Takeaway is next on ITV, Saturday March 12, at 7pm.