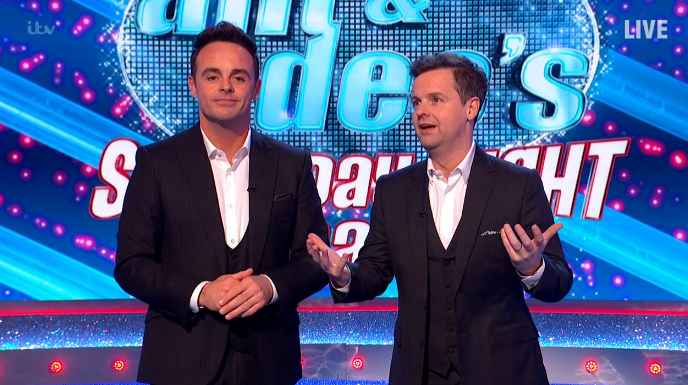 Viewers of Saturday Night Takeaway aren’t impressed with tonight’s open to the show.

Singer Annie-Marie performed her hit song on the programme BIRTHDAY and Ant McPartlin and Dec Donnelly jokingly thought it was actually her birthday.

They bought her a cake and a card and the star had to tell the duo they got the wrong date.

Anne-Marie then asked the hosts if she could still take the cake and the card.

Dec said: “I do mind, you’re not having that,” as he ripped the card up.

Ant then threw the cake on the floor, which left some viewers unhappy as they called it “wasteful”.

One person said: “Ant & Dec, I don’t care if it’s not Anne-Marie’s birthday, you NEVER waste a cake like that. Ever.”

Ant & Dec, I don't care if it's not Anne-Marie's birthday, you NEVER waste a cake like that. Ever. #SaturdayNightTakeaway #AntAndDec

Another wrote: “That was a waste of a cake!” while a third added: “What a waste of food throwing a full cake on the floor.”

A fourth tweeted: “I mean, that’s just a waste of a good cake.”

I mean, that’s just a waste of a good cake 😑#antanddec #SaturdayNightTakeaway

What a waste of a delicious cake #SaturdayNightTakeaway

The show returned for a brand new series last weekend.

Despite a successful first show, 68 people complained to Ofcom about the Pussycat Dolls’ performance, which saw hosts Ant and Dec take part as they hilariously began stripping to their vests and boxers.

In the funny skit, the duo also held up “censored” cards over them during the routine.

Ant and Dec also jokingly asked the singers to “tone down” their raunchy performance for their “family friendly” show after the band sparked hundreds of complaints for their routine on X Factor: Celebrity at the end of last year.

According to The Sun, 68 viewers complained to Ofcom over the performance.