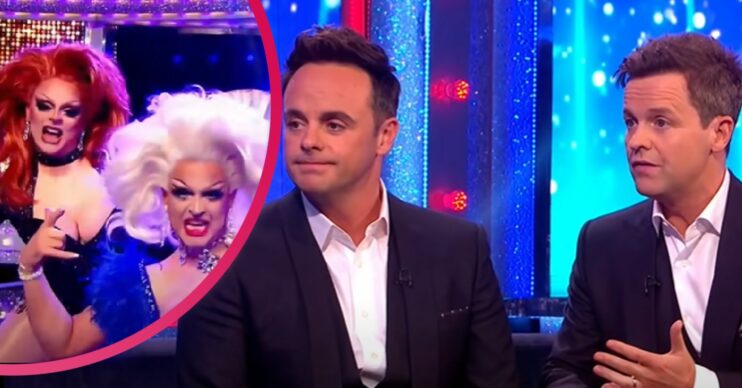 Ant and Dec transformed into the Angels of the North!

However, the incredible performance has sparked complaints to TV watchdog Ofcom.

Last Saturday, Ant and Dec transformed into the ‘Angels of the North’ for their End of the Show Show as SNT made a return.

Hundreds of viewers absolutely loved Ant and Dec’s performance, with many branding it the duo’s best yet!

But sadly, some people complained over the scenes and went as far as to complain to Ofcom.

According to the watchdog, 59 people issued complaints about the performance.

It comes after some people aired their thoughts on Twitter, and some disapproved of Ant and Dec’s routine.

One person said: “Very disappointed finale is all recorded – what is the fascination of men dressing as women? Just looks stupid.”

Others were already predicting complaints to Ofcom!

One added: “Can’t see The End of the Show Show going down very well for some viewers, I’m guessing a few complaints will be made by the viewers to Ofcom.”

However, the Geordie duo received much praise and positive comments about their performance.

One gushed: “Just watched Saturday Night Takeaway, my jaw dropped to the ground when I saw Ant & Dec in drag, god they can pull it off, looked F A B U L O U S.”

Another insisted they were “absolutely living” for Ant and Dec in drag.

A third wrote: “Still cannot get over @antanddec in amazing #drag #SaturdayNightTakeaway and on primetime TV wow #LGBTQ so powerful.”

Another hit back at critics, writing: “Fair play to @antanddec last night. They looked amazing in drag and put on a fantastic show.

“To all the haters bleeting on, take a chill pill.

“Men have been dressing up as women and performing on telly since the 60s. It’s now 2022 calm down.”

Did you enjoy Ant and Dec’s performance? Tell us on our Facebook page @EntertainmentDailyFix.