Viewers of Saturday Night Takeaway spotted a blunder during the opening show of the new series last night (February 22 2020).

At the end of the closing act, which saw The Pussycat Dolls take to the stage to perform a medley of their greatest hits, presenter Declan Donelly appeared to forget what show he was on as he signed off.

Dec made the blunder at the end of the show (Credit: ITV)

As the pop group performed, Ant and Dec joined them onstage, making reference to the girl group's racy appearance on The X Factor.

Holding up censored signs, the comedy duo then stripped down to their vests and boxer shorts.

We'll be back next Saturday with I'm a Celebrity Get Me Out of Here!

Once the performance was over, the girls - including Nicole Scherzinger and Ashley Roberts - surrounded the pair and, as time was running out, Declan signed off by saying: "We'll be back next Saturday with I'm a Celebrity Get Me Out of Here!"

It wasn't long before viewers noticed the blunder, and took to Twitter to point out the mistake.

Was dec not meant to say we will be back next week with get out of my ear?

Probably getting counted down when off air it's probably distracted dec 😂

I presumed it was just a joke; the guy was stood there half-naked and he is a celebrity so the comment made perfect sense to me!

I spotted that blunder straight away.

One viewer wrote: "Brilliant first show, so glad to have it back and perfectly finished with a slightly flustered Dec @antanddec surrounded by Pussycat Dolls thinking he was still in Australia..."

Another said: "I presumed it was just a joke; the guy was stood there half-naked and he is a celebrity so the comment made perfect sense to me!"

"I spotted the blunder straight away," a third commented. 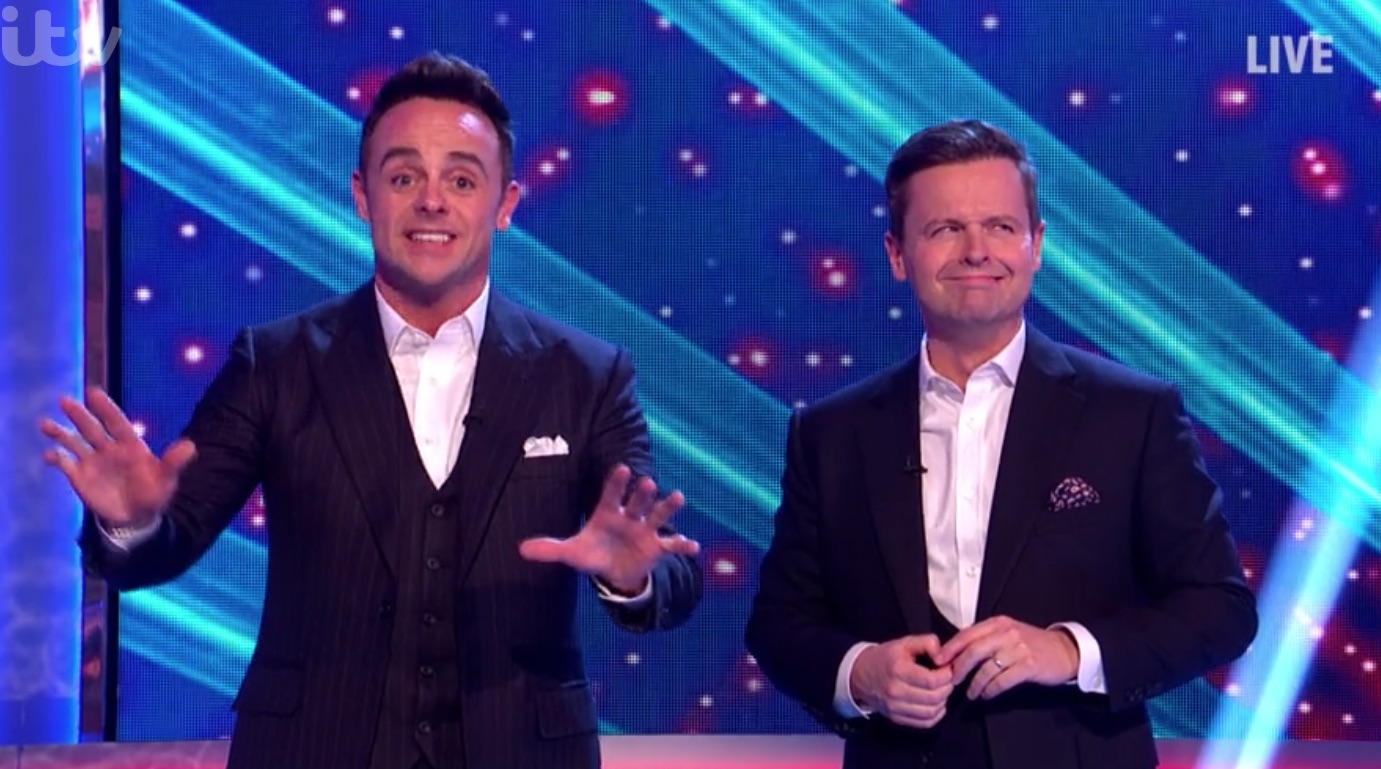 The pair wondered why the audience was laughing (Credit: ITV)

Dec later addressed the gaffe on Twitter, telling fans: "Thanks for all the lovely messages, we're so happy you enjoyed #SaturdayNightTakeaway tonight, we had enormous fun (even tho I thought it was #ImACeleb at the end!) It's great to be back!"

Thanks for all the lovely messages, we’re so happy you enjoyed #SaturdayNightTakeaway tonight, we had enormous fun (even tho I thought it was #ImACeleb at the end!😂🤦🏻‍♂️)
It’s great to be back! D x

Even though viewers were overjoyed to see the duo back on their screens again, the first show had its fair share of mishaps.

At the start of the programme, Ant and Dec were preparing to spring a surprise on a couple from the northeast who had lost one of their daughters three years ago.

But as they were attempting to explain the couple's experience, the audience laughed.

As they turned around, they saw what the audience was laughing at - footage on a big screen behind them showed one half of the couple picking her teeth as she was waiting in the queue.

One viewer wrote: "Wondered why the audience were laughing... the woman picking her teeth will be mortified she was caught on camera."

When the couple made it into the studio, Ant and Dec surprised them with a brand new house.