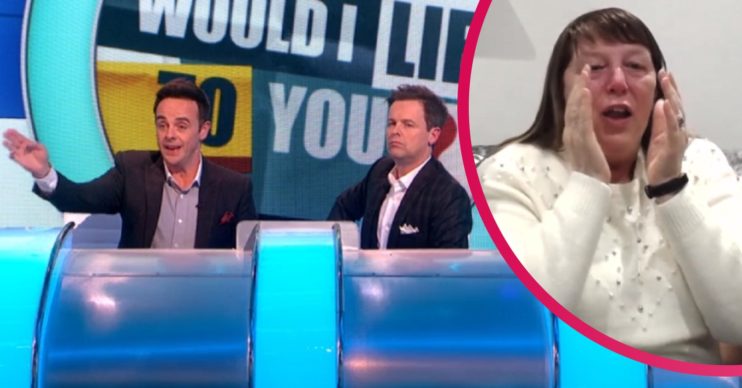 She seemed happier about the holiday

Saturday Night Takeaway saw Ant and Dec joke that a contestant was “furious” as she learned her daughter was pregnant live on air.

During Saturday’s (March 13) episode of the ITV programme, hosts Ant McPartlin and Dec Donnelly played a game called Mam, Would I Lie To You?

Who joined Ant and Dec on Saturday Night Takeaway?

Michelle Visage, the evening’s guest announcer, joined them on the spoof of the BBC comedy panel show, as did comedian Lee Mack and presenter Stephen Mulhern.

For the second part of the game, contestant Brenda – watching at home – had to maintain a strict poker face as three women pretending to be her daughter each told a different story about an item to the celebs in the studio. The celebs then had to guess which was the real daughter.

After two had played the game and the daughters came back into the studio, Ant and Dec told the two contestants that their daughters had some very special news for them – they were both pregnant!

However, one of the contestants, Brenda from Durham, didn’t immediately jump for joy after the news was revealed.

Shortly after, they told both contestants they had also won a free holiday to Malta – and Brenda exploded with glee, screaming in her living room.

Her reaction on the show got viewers talking on social media.

On Twitter, one viewer joked: “Brenda was more happy about the holiday than the grandkid.”

A second put: “Brenda you’re going to be a Granny [angry face emoji]. How about a holiday in Malta? [Happy face emoji].”

A third laughed: “Brenda on #SaturdayNightTakeaway is a ledge.”

I think Brenda’s pleased? She looks furious but I think she’s pleased.

A fourth tweeted: “I love that Brenda is clearly happier about the holiday than she is that she’s going to be a grandma.”

Someone else said: “Look on Brenda’s face. Someone just found out they would be on babysitting duties.”

“Brenda was fuming,” wrote another.”

One viewer speculated: “I don’t think Brenda heard properly about being a grandma. I think she thought it was the other mum.”

I love that Brenda is clearly happier about the holiday than she is that she's going to be a grandma. #SaturdayNightTakeaway

Look on brenda's face. Someone just found out they would be on babysitting duties. #SaturdayNightTakeaway

I don't think Brenda heard properly about being a grandma. I think she thought it was the other mum. #SaturdayNightTakeaway