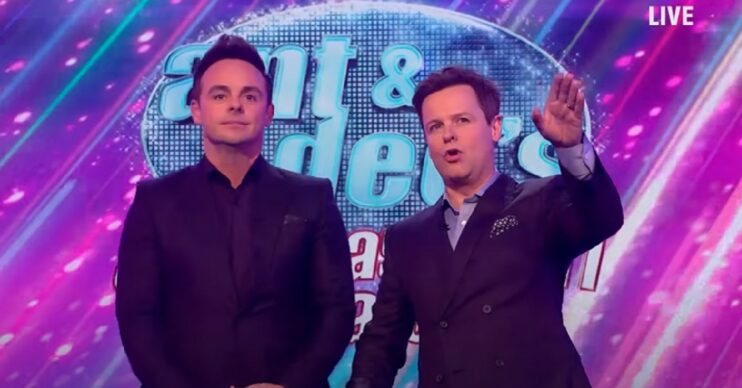 Viewers were left asking what the 'rude word' was!

The Geordie duo first issued an apology for “bad language” during the show’s The Masked Singer-themed segment.

Audience member Laura had been invited up on stage and was surprised by her daughter visiting from Canada.

She was also left shocked when her grandchildren, including baby Logan who she had never met, also surprised her on stage.

However, it seems that during the emotional moment, Laura accidentally swore.

Ant McPartlin told viewers: “We’d like to apologise for any bad language that might have been said during that, she was a bit shocked.”

Meanwhile, later in the show, the presenter apologised again for more “rude words”.

It came after the show’s I’m A Celebrity Get Out Of Me Ear, the segment which sees Ant and Dec deliver requests to celebrities through an earpiece.

In the segment, Craig had to pretend he was on the search for a wedding planner with members of the public.

Craig had to deliberately smash a vase, but make it look like it was accidental.

As the vase dropped and smashed, both Craig and the ‘wedding planner’ gasped.

The ‘wedding planners’ then discovered they were on Saturday Night Takeaway as one woman said: “Thank goodness I’ve got panty liners on!”

The show returned to the studio as Ant and Dec spoke with Craig and the ‘wedding planners’, who were in the audience.

However, following the segment and an advert break, Ant and Dec apologised for any rude words.

Ant said: “We just want to apologise if you spotted any rude words in the last part of the show.”

But viewers were baffled and didn’t pick up on the ‘rude’ word as well as not noticing Laura’s swearing either.

Me trying to remember if there was any rude words before the ad break 🤣🤣 #SaturdayNightTakeaway pic.twitter.com/tJwy3AJnUC

Me trying to work out what the rude word was? #SaturdayNightTakeaway pic.twitter.com/bzXoN6jOR9

What did viewers say about Ant and Dec?

One person said on Twitter: “Why do Ant & Dec keep apologising for bad language I haven’t heard any must be my hearing.”

Referring to Laura’s segment, another wrote: “How lovely, have a tear or two in my eye. Missed the bad language though ffs.”

A third added: “Me trying to remember if there was any rude words before the ad break.”

A fourth tweeted: “Me trying to work out what the rude word was? #SaturdayNightTakeaway,” followed by an image of Shrek looking puzzled.