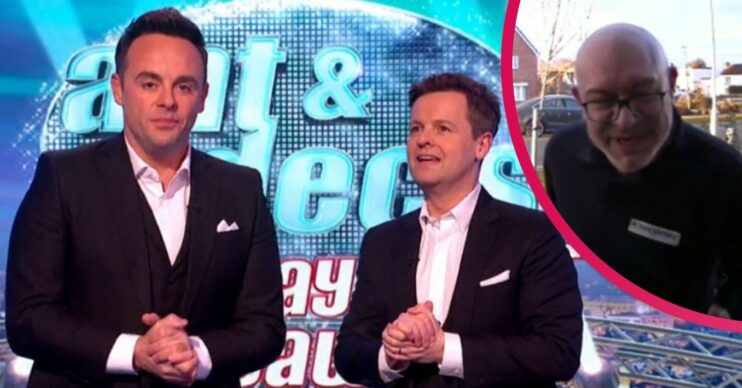 Saturday Night Takeaway viewers shared their fears for a guest during last night’s show as the 2022 series came to an end.

The Ring My Bell segment was back which sees Ant and Dec surprise audience members by showing footage from their video door bells.

They have to stand up if they recognise their home and the Geordie hosts then appeal to the audience member’s neighbours to turn up at the front door.

They also have to bring a household item requested by Ant and Dec to win £500 for themselves and the audience member.

However, during last night’s finale, one man suffered an epic blunder when he spilled his address live on air.

As one door bell was shown, Ant and Dec requested that the neighbour brings a wheely bin.

With seconds remaining on the clock, a man appeared with his bin as Ant and Dec asked his name and the number of his house.

However, he accidentally revealed his whole address!

One wrote: “That guy saying his full address on #SaturdayNightTakeaway wasn’t wise, now people know there’s a house on that street that’s empty this evening.”

Another said: “Maybe not the best idea to give away your address on national TV.”

A third added: “I enjoy #SaturdayNightTakeaway with @antanddec but I question the wisdom of getting people to dox themselves in the Ring My Bell segment.

“I may be wrong but I don’t think it’s wise to broadcast the number of your house, along with the street name, and your name on national TV.”

But others found the whole incident hilarious.

One tweeted: “Not the guy giving his full address out, can’t beat live TV.”

Another said: “Does he realise he’s just given his address to 9 million people,” followed by a laughing face emoji.

Will you miss Saturday Night Takeaway? Tell us on our Facebook page @EntertainmentDailyFix.