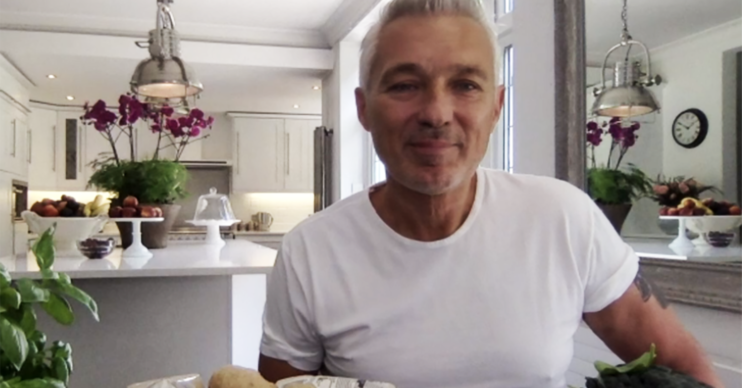 Martin appeared on the show on Saturday

Saturday Kitchen viewers could barely focus on the cooking after they realised that special guest Martin Kemp’s clock was wrong.

The Spandau Ballet star, 58, appeared on Saturday morning’s instalment of the BBC show.

And the fact that his clock seemed to be a few minutes out proved to be quite the distraction from the mouth-watering food.

“Martin Kemp seriously needs to sort his clock out in his kitchen,” one person posted on Twitter.

“Martin Kemp now on #saturdaykitchen. But why is the clock in his kitchen 5 minutes fast?” wondered another.

One begged: “Can someone please tell @realmartinkemp that the time on the wall clock is wrong?”

There was even some chat about whether the clock was being reflected in a mirror.

And one person tweeted: “Viewers asking about Martin Kemp’s clock… it may be that his filming device is set in ‘selfie’ mode, so the image will be back to front?”

Clock drama aside, Martin had viewers swooning when he talked about his relationship with his beloved wife Shirlie.

The couple have been married since 1988 after being set up by their late friend George Michael, and are parents to daughter Harley and son Roman.

“Love comes in and out, and friendship you have to have that, that is the bedrock.

“Shirlie and I have been best friends since the day we met 40 years ago and I love her dearly, she is just wonderful.”

“Think everyone was inspired about what you just said about love & marriage,” said one impressed viewers on Twitter.

Huge thanks for watching this morning! 🥳

Don’t forget Best Bites tomorrow at 10am on @BBCTwo and we’re back live next Saturday at 10am!#SaturdayKitchen pic.twitter.com/dUpYEzvBB5

“Martin Kemp is a really nice chap. So many men would never completely voice their love in such an unabashed fashion,” said another.

“Martin Kemp was a great guest, his love for his wife and family just shone through,” said another.