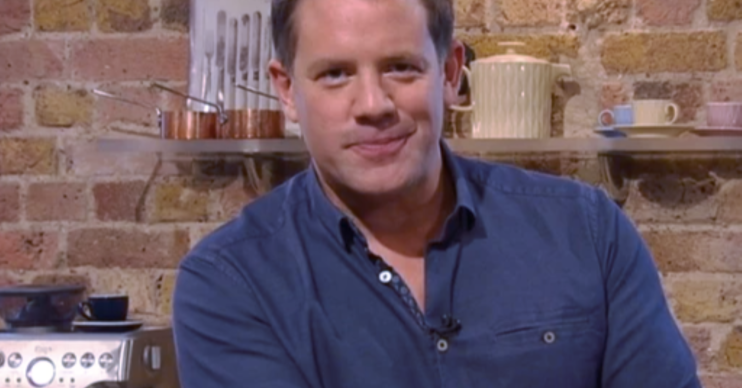 Host Matt Tebbutt failed to control his guest chefs over the rules of social distancing on Saturday Kitchen Live this morning.

Matt, who has been hosting the popular weekly cookery show for a year now, had to intervene twice during the programme

In front of special guest Jo Brand, who was not present in the studio, Matt reminded ‘queens of barbecue’ Shauna Guinn and Sam Evans not once, but twice, not to touch the plates of food that they’d just prepared because he was about to eat from them.

Shauna and Sam can be forgiven for forgetting the new rules of lockdown because, as well as owning a restaurant and co-hosting their own TV series, Sam & Shauna’s Big Cookout, they’re also a real-life couple. So they were able to sit closer than the recommended two metre distance.

The TV chefs also revealed that today they celebrated 20 years of being together. Before the lockdown, they had planned to marry today with a sort of wedding festival.  What a shame to have to postpone it!

Their first dish,  duck with ‘smacked cucumbers’, went well until they presented it for Matt to taste. One after the other, they both touched Matt’s plate and moved it into a different position – a definite TV no-no.

Host Matt exclaimed: “Do you remember how we said in rehearsal put it there and leave it there?!”

Read more: The doughnut SANDWICH exists and you can get it delivered straight to your door

Later in the show,  the TV chefs hadn’t learnt their lesson when it came to cooking what they called ‘chicken-fried steak’ with wilted greens. Inspired by their love of all things American Southern and barbecued, this was a piece of steak that had been deep-fried.

She was referring to the proposals to import US chicken with different welfare standards from UK poultry.

Everything was going well until Shauna and Sam offered the meal to Matt, who shouted again, “Don’t touch it!”

But it was too late. Shauna even called out to her girlfriend “Leave the plate!” even though she herself was guilty of touching it before allowing Matt to pick it up himself.

Despite the confusion, Jo loyally told the women, “That looks delicious, I’d eat it all”.

And a fan of Saturday Kitchen Live went on Twitter to agree. She pointed out that it was a shame that Jo couldn’t be in the studio to try it for herself.

#jobrand Fancy being on Saturday kitchen live when you can’t taste the food!! They should send some round to you in advance. Sad days.

Are you finding it difficult to keep to the lockdown rules?  Go to our Facebook page @EntertainmentDailyFix and let us know what you think.