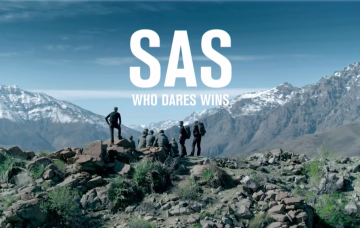 SAS: Who Dares Wins star reveals there’s ‘definitely space’ for a kids’ version of the show

We’ve got good news for fans of Celebrity SAS: Who Dares Wins.

Show bosses are said to be in talks to make a new version of the show.

And it could feature kids!

The celebrity version of the Channel 4 reality survival series – fronted by hunky chief instructor Ant Middleton – has been a huge success.

He told The Sun they have “talked about” how the show could work in “different formats”.

There is definitely space for a similar kind of thing for kids.

However, it could prove tricky adapting the gruelling challenges set on the show to suit younger competitors.

Ollie revealed: “There have been talks about that, but I don’t think they’d change the format of Celebrity SAS. There is definitely space for a similar kind of thing for kids.”

On the show, Ant and his team recreate the Special Air Service’s gruelling selection process.

They set challenges to test the physical and psychological resilience of the participants.

The latest series has seen celebrities including Katie Price, Helen Skelton and Brendan Cole face their biggest fears on the Scottish island of Raasay.

But a kids’ version of the programme would have to dramatically change, starting with Ant’s bad language.

Ollie added: “I don’t know how Ant would get on with the swearing. There would be more bleeps than words.”

Channel 4 bosses are also planning to move filming to a warmer location, which Ollie thinks will be the ultimate test.

He said: “The UK will be wanting to film the next SAS: Who Dares Wins [after lockdown]. I think to be honest we are pushing for somewhere warm next time, so that would be a preference, for sure.”

Ollie revealed they are doing a version of the show for Australia and are hoping filming will restart as soon as travel and filming is allowed.

And, wanting to get as far away from chilly Scotland as possible, he revealed his dream filming location would be Bora Bora in sun-kissed French Polynesia.

Celebrity SAS: Who Dares Wins continues on Channel 4 on Monday, May 18 at 9pm.

Leave us comment on our facebook page @EntertainmentDailyFix and let us know what you think of this story.