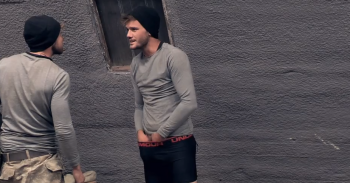 He asked for medical advice

Jeremy Irvine shocked his SAS: Who Dares Wins co-stars as he revealed his injured privates.

During last night’s show, the actor turned to Made In Chelsea star Sam Thompson for advice after spotting a sore on his penis.

As he looked down his pants, Jeremy said: “Oi, one of the boys, have a look at this.”

Sam walked over and had a little peak before shouting: “Oh [expletive]!”

Jeremy asked: “Is that right? That’s not right, is it? It’s been just rubbing. It’s got a [expletive] red ring around it.”

Urging Jeremy to seek medical help, Sam said: “Go and see a doctor about that, for sure mate.”

Sam then admitted the incident had put him off his food!

Sam and Jeremy have joined a string of celebrities including Andrea McLean, footballer Wayne Bridge and Olympic cyclist Victoria Pendleton as they compete to see if they have what it takes to pass SAS standards.

The stars are raising funds for Stand Up To Cancer.

Camilla decided to quit the show after a challenge, which saw the recruits first cross a gorge using a ladder and then run down a severely steep terrain.

After Camilla pulled out, the remaining recruits were led through an escape and evasion scenario, which saw both teams captured and then interrogated under extreme conditions to test their resistance.

Dev requested to see a doctor before quitting the show.

He had been subjected to four hours of torture positions and horrific noises designed to disorient him, which left him fearing he was losing his mind.

Breaking down in tears and clutching onto the doctor, Dev said: “So [expletive] hard. I just can’t handle this [expletive], the noises are playing with my [expletive] mind, the noises.

“I can’t lose my mind after this. I just wanted to keep on going but I couldn’t.”

He added: “I’m crying. I haven’t cried for 15 years about anything. But I just felt so alone. Is it over?”