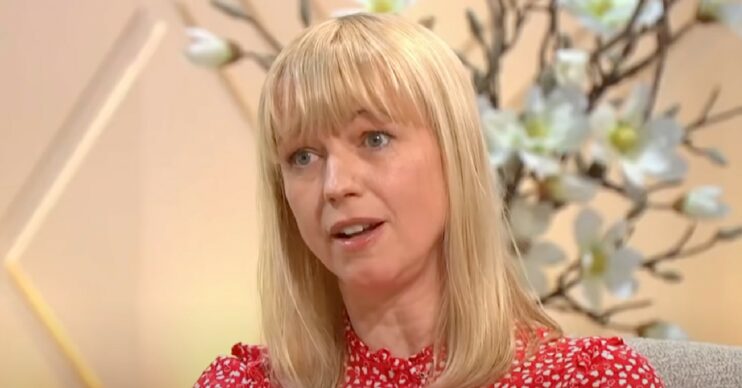 Sara Cox on the secret health condition that left her ‘struggling’

She's feeling a lot more confident since her diagnosis

The radio presenter, who rose to fame on The Big Breakfast, hosts the new eight-part series alongside comedian Darren Harriot.

However, viewers of the show may not know that Sara was diagnosed with an eye condition after turning 40.

Britain’s Got Takeaways host Sara Cox on her eye condition

The 47-year-old star opened up about her health during an interview with the Belfast Telegraph in 2018.

Sara explained that while she doesn’t mind getting older, it hasn’t been completely smooth sailing.

She told them: “The only difference I’ve noticed in myself since being 40 is that I’ve been diagnosed with presbyopia.

I’ve been diagnosed with presbyopia.

“I struggled reading small print, then I discovered Acuvue Multifocal Contact Lenses. I pop them in and can totally forget about my vision, which suits me because I’m so active – I wouldn’t feel as confident in glasses.”

Presbyopia is when the lens in the eye stiffens and thickens with age, which makes it harder to see things at close range.

People are usually diagnosed with the condition whilst having an eye test.

Meanwhile, Sara prides herself on being as healthy as possible.

In 2017, she launched a campaign called Organic: Feed Your Happy.

At the time, she explained: “I choose organic because I think it tastes better, it’s gorgeous, and I think it’s good for the animals and good for the planet.

Read more: How old is Sara Cox? Presenter is host of Back in Time for the Corner Shop

“Food grown organically is food as it should be. Give me a knobbly misshapen organic strawberry over the weirdly uniform non-organic ones any day. To put it simply, organic food makes me happy.”

However, that doesn’t stop her from tucking into tasty treats on Britain’s Got Takeaways.

The series sees the UK’s best-loved independent takeaways battling it out in a fast-food showdown.

What has Sara said about the BBC Two show?

Ahead of joining the series, Sara said: “When I first heard about this show they had me at takeaway! Especially in recent times, the takeaway has become something of an event in our house.

“We look forward to burgers, noodles, curry – all delicious and delivered to our front door.

“I’m thrilled to be celebrating the takeaway and finding the very best in Britain, and if that means eating all the left over chips and putting on half a stone, so be it.”