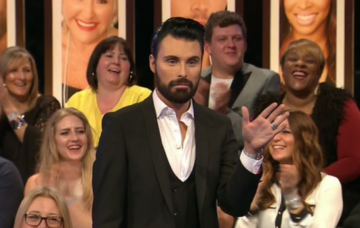 The presenter made his views very clear

Rylan, who presents Big Brother’s spin-off show Bit On The Side, had previously tweeted his condolences when former Big Brother contestant Rebekah’s Twitter account was hacked and a message posted saying she had passed away.

The transgender reality star, who appeared on the fifth series of Big Brother in 2009 as Rodrigo Lopes, was forced to post a video saying that she was very much alive, and Rylan has now sent his support.

“Absolutely disgusted that someone would do that,” Rylan tweeted, adding: “Glad you’re well @MissRShelton”

Rylan had responded to the original tweet which was posted on Friday morning and has now been deleted.

The original tweet read: “We’re sorry to inform everyone of the sad news that our wonderful and lovely Rebekah died unexpectedly on Wednesday night.”

The message was quickly picked up by news outlets, as well as the official Big Brother Twitter account, forcing Rebekah, who was on holiday in Doha at the time, to post a video disproving the claim.

In the message, she said: “I have been through hell today because someone used my Twitter account to write that stupid statement about me. This person can’t accept the fact I’m happy, I overcame all my problems and I’m finally happy.”

Rebekah finished fifth on Big Brother 10 in 2009 and started living as a woman three years later before she underwent gender reassignment surgery in 2014.

She had recently tweeted her thanks to “people from the UK who had always loved and accepted me for who I am” before her account was hacked.

In the tweet posted with her video, Rebekah promised that her lawyers are already on the case and that “this person who wants to spoil my happiness is going to pay for it.”

Rebekah has received huge public support since the message was posted, however, with one fan saying she was glad Rebekah is “alive, well and beautiful.”

The experience has even turned into a positive one for Rebekah, who has now tweeted her thanks for the messages of support

“Although it was a horrible experience to find out that I was dead, the positive thing is that I realise that I’m loved and so many people cared about me,” she wrote.

“Thanks for the support.”