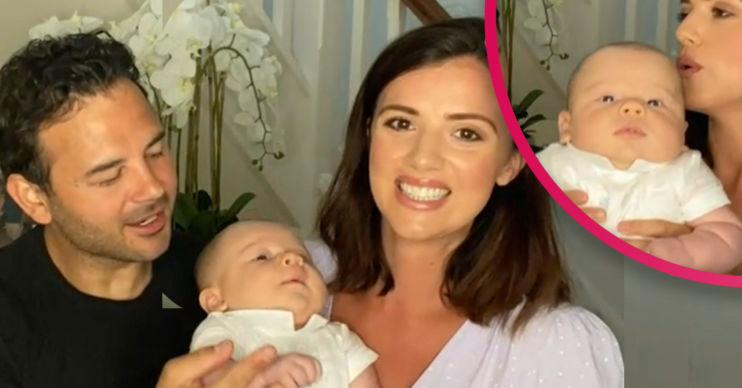 The gorgeous 10-week-old tot joined his famous mum and dad for an interview with Lorraine Kelly on Good Morning Britain.

But as he came on screen, his dad decided to highlight a little accident he’d had off camera.

Laughing, Ryan said: “We put him in his best outfit today just for you Lorraine and…”

The former Coronation Street star then lifted up his son and pointed out a huge yellow stain on his little outfit.

Opening up about being new parents during lockdown, Lucy admitted it had been “tough”.

However, she admitted that there were also some huge positives.

“The first few weeks for me were really difficult,” she explained.

“Everyone said while I was pregnant to take all of the help, have everyone round to hold him while you have a nap and they can come round and make you dinner.

“We haven’t had that support – but what we have had is every single moment with him.

The siblings were on the show to promote their ITV series Absolutely India: Mancs in Mumbai.

On the show, the brothers travel around Mumbai with their father Dougie James.

“It definitely took a different direction to what we originally expected,” Adam revealed.

“We had some unanswered questions about our dad and why he left us – that came out while we were out there.”

Scott then warned that tonight’s episode is going to be a tera-jerker.

He added: “We get closure on a lot of things we’ve held back on for many years.

“It’s an emotional episode so make sure you’re prepared.”

Absolutely India: Mancs in Mumbai is on ITV, Wednesdays at 8pm.