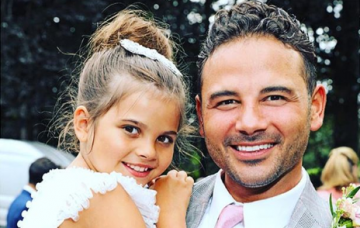 Scarlett thinks her daddy should win

Beleaguered Celebrity Big Brother star Ryan Thomas has been sent a lovely message of support from his daughter, Scarlett.

The nine-year-old spoke directly to camera in a video filmed by her uncle, and Ryan’s younger brother, Scott .

The clip was posted in response to Ryan breaking down over accusations he punched housemate Roxanne Pallett in the ribs.

On Saturday night’s episode of Celebrity Big Brother, conversation about the alleged incident and subsequent fall-out was rife, and the former Corrie actor seemed to reach breaking point.

In footage filmed Friday, Roxanne, who has now left the show, told Ben Jardine, Jermaine Pennant and Dan Osborne about the incident from her point of view.

The boys then took Ben to one side to get his side of the story, leaving him gobsmacked.

Ryan was shocked when he found out that Roxanne had even taken steps to ensure her safety by moving into the spare room for a night.

Housemates Psychic Sally and Kirstie Alley comforted Ryan, who then went to the diary room and broke into tears.

But at the end of the episode, Roxanne made the shock decision to leave the house when she heard the live audience, gathered outside for Ben’s eviction, calling for her to be booted from the show.

Ryan broke down again in the diary room, out of relief that viewers seemed to be on his side.

Teary eyed, he said: “You’re cocooned in here, and I needed to hear that because I was so scared that I’d let everyone down.

“I’m telling you after this, I’m going to throw all my emotion out of this and just get on with it. Hopefully there’s no more curve balls. Just put this to bed and move on.”

Do you think Ryan will win the series? Leave us a comment on our Facebook page @EntertainmentDailyFix and let us know what you think!