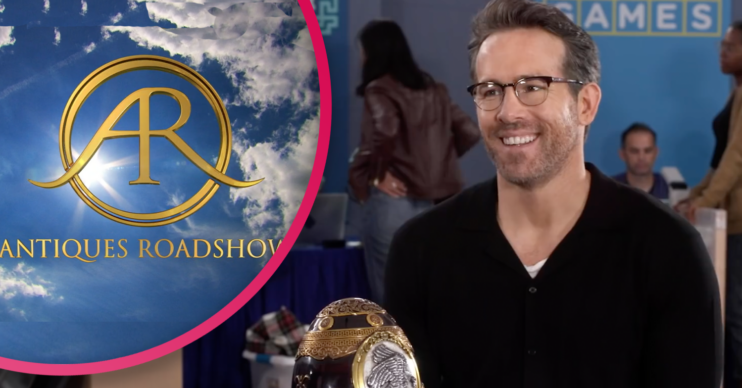 And his artefact was worth a pretty penny!

Antiques Roadshow fans got quite the shock when they spotted a post by Hollywood actor Ryan Reynolds on Instagram last night (November 15).

The actor, who recently released new Netflix film Red Notice, appeared to have made a guest appearance on the much-loved show.

And he shared a video of himself and his treasure as they made their “appearance” on the show.

The clip which Ryan posted to Instagram saw him in character as Red Notice’s Nolan Booth.

Read more: Sisters get a shock as Antiques Roadshow expert values heirloom at £30,000

Mason asks Ryan to tell him about the golden egg in front of them.

Lark assumes Ryan received the egg the way most guests on the show acquire their items – through a relative.

He asks: “And what’s its family history?”

Ryan says: “Well, no. This is not a family heirloom – my family disowned me years ago. They don’t like me.

“But this is more of an heirloom that my good friend at the museum lent me.”

Ryan then hesitates before blurting out that his friend is, in fact, unaware that he lent the egg to him.

So how much was the egg worth?

Lark reveals the egg is one of three commissioned by Cleopatra at the end of her life in 30BC.

Two were held in public collections and one went missing during Word War Two.

Read more: Table becomes one of the most expensive items in Antiques Roadshow history

Lark says: “German soldiers had taken it to a secure hideaway. And there it remained up until recently.”

He then reveals it had recently been stolen by a “handsome FBI agent”, referring to The Rock’s character in the film.

Lark then tells Ryan it has a value of more than $100m.

How did Antiques Roadshow fans react?

It’s fair to say they loved the skit, and wished that Ryan would appear on the show in real life.

“OMG so perfect!!!” declared one fan.

“One of the funniest people on earth,” said another chuckling fan.

“The fact that Ryan used the Antiques Roadshow for a promo is absolutely perfect. This guy is an entertainment genius!” declared another.

“How do you think of these things! Great skit, Ryan,” another added.

You can watch Ryan in Red Notice on Netflix now.

What did you think of the sketch? Tell us on our Facebook page @EntertainmentDailyFix.