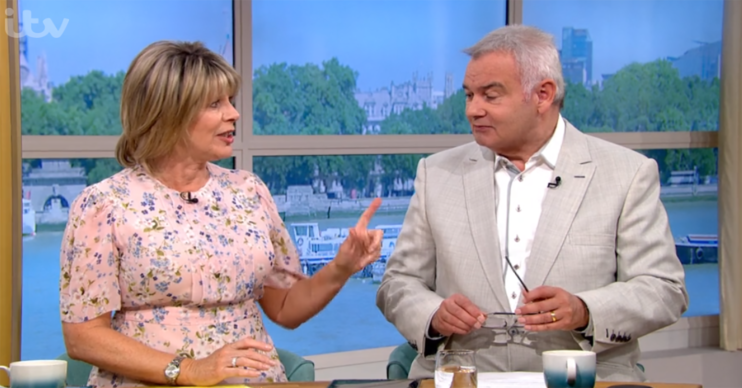 Ruth Langsford snaps at Eamonn Holmes for ‘mansplaining’ on This Morning

Eamonn tried to explain something to his wife

The pair were discussing fruit flies at the start of the programme.

Eamonn continued: “They say the subjects in question are especially common in summer and autumn months as they are attracted to ripened and fermenting fruits.”

Reading from a press release, he said: “They are commonly indigenous.”

He then turned to his wife and added: “That means they’re commonly found throughout the UK.”

Stunned by his comment, Ruth snapped back: “Yes, I know what indigenous means… stop mansplaining.”

Meanwhile, Ruth and Eamonn are set to host This Morning all of next week.

Regular hosts Holly Willoughby and Phillip Schofield are taking a week off for half term.

On Thursday’s show, a fun TV advertisement showed Eamonn and Ruth dancing on a giant key board.

While the couple showed off their moves, a voiceover said: “Hit the right note with Eamonn and Ruth next week on This Morning.”

Yesterday, Ruth teared up on Loose Women when discussing a moment her and Eamonn’s son Jack caught her crying.

Why did Ruth cry?

The moment came after she had been on the phone to her parents.

She had a little cry about missing her mum and dad – and then realised her son Jack was there.

However, he did see his mum crying.

That memory set her off again – and it wasn’t long before she was dawbing at her eyes with a tissue.

'It's all right to cry, because I've just done it on the telly.'

Read more: Ruth Langsford in tears over emotional moment she shared with son in lockdown

Her co-star Nadia Sawalha told her: “It’s ok to express it, it’s really important, isn’t it?

“I think sometimes we underestimate how strong our families are.”

Can you relate to Ruth’s moment with her son? Go to our Facebook page @EntertainmentDailyfix and leave a comment to let us know.