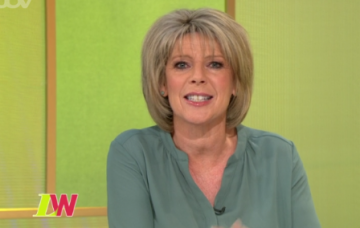 Ruth Langsford shared a picture of her son Jack on Wednesday’s episode of Loose Women.

The sixteen-year-old, who is Ruth’s son with husband Eamonn Holmes, is rarely pictured on the couple’s social media accounts.

But the Loose Women host managed to persuade him to pose for a photo with her, after bosses challenged the presenters to recreate childhood images with their kids.

The ITV show were inspired to try the trend, after seeing the many hilarious pictures of parents and siblings re-staging poses from the past on the internet.

Ruth admitted it did take “some persuading” to get Jack, who is currently revising for his GCSEs, to take part.

He reluctantly agree to pose for a picture, and Ruth chose to recreate an image of them in bed, when Jack was a couple of months old.

“I look knackered, don’t I?” she said of the original pic, where baby Jack is closest to the camera and she lies behind him.

She then showed the recreation of a grown-up Jack, now dwarfing his mother.

Ruth’s co-stars and the studio audience loved the snap, clapping and giving it a round of applause.

“He does not look happy!” Mel B laughed of the modern picture.

Former Spice Girl Mel B said she would have to recreate a childhood pic with her daughter, Phoenix, 19, who is due to appear on Loose Women tomorrow.

Meanwhile, Nadia Sawalha also convinced her daughters Maddie, 15, and Kiki, ten, to recreate family photos from when they were babies.

In both original shots, Nadia, 53, cradles her newborns.

In the up-to-date versions, they are now too big for her to carry. Kiki gamely recreates the scrunched up, crying face seen in her baby snap while Maddie pretends to be asleep.

“God love them for doing that, thanks girls,” Nadia said after the pictures were shared.

Have you recreated any old family photos? Leave us a comment on our Facebook page @EntertainmentDailyFix and let us know what you think!