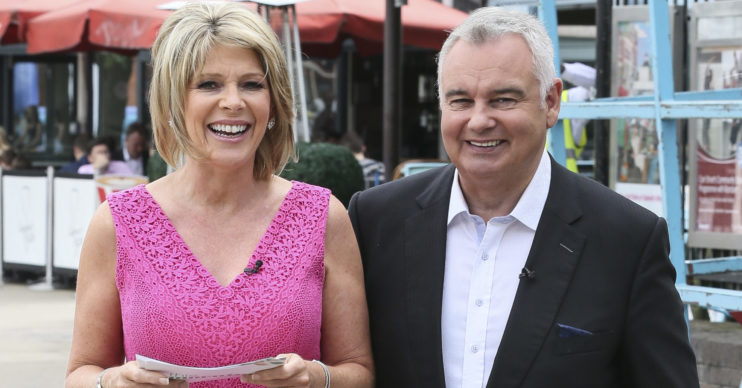 The TV couple have been together for 24 years

This Morning’s Ruth Langsford has shared a touching tribute to husband Eamonn Holmes on their 10-year wedding anniversary.

The ITV star, 60, marked the milestone occasion with a series of romantic throwback snaps from their special day in 2010.

In the photos, the pair appear completely besotted as they celebrated at The Elvetham Hotel in Hampshire, with Ruth telling followers they’re still “loving & laughing” two decades on.

The couple have been together for 24 years and share 18-year-old son Jack.

How are the pair celebrating?

The couple kicked off their special day by hosting their usual Friday spot on This Morning.

And it appears the occasion didn’t go amiss as Eamonn gifted Ruth a sentimental present of his own – a hamper of tinned goods.

Any guesses as to which one @EamonnHolmes went for? 😂#ThisMorning | Live from 10am 👉 https://t.co/Q7IV485mUn pic.twitter.com/lsIH3XYLRs

Sharing the present with viewers, Eamonn explained: “Anniversary’s 10 years, so what are you supposed to mark 10 years with?”

Eamonn added: “Oddly enough I went for tin and here’s some of the things here.”

The 60-year-old host then went on to pull out a selection of tinned goods, including a can of gin and tonic, tinned biscuits, coffee and soup.

Eamonn’s efforts seemingly went down well with viewers, with one writing: “Love it, such a great and thoughtful gift.”

Another said: “Tin! Eamonn buy Ruth a diamond – for a diamond!”

Eamonn and Ruth tied the knot at Elvetham Hotel in Hampshire in 2010, having first met in 1997.

They welcomed their son Jack in 2002.

Eamonn also has three other grown-up children from his first marriage to Gabrielle Holmes – daughter Rebecca and sons Declan and Niall.

The presenter previously told OK! magazine that the secret to his successful marriage with Ruth is that they still make one another laugh.

He said: “We laugh and we’re interested in each other. We signed up for the long term.”

Meanwhile, Ruth added that living and then working together as co-presenters doesn’t get too much, as they try not to discuss work at home.

She explained: “I don’t like taking my work home with me… if you’re not married and just co-presenters, you go home to different homes.