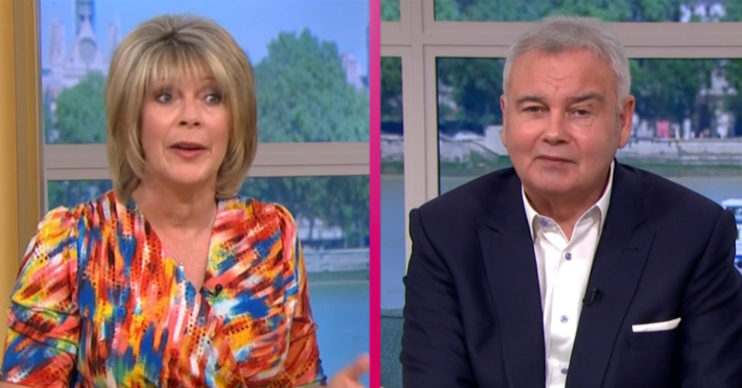 Ruth Langsford jokingly scolded her husband Eamonn Holmes for making a “sexist” comment on This Morning.

The pair were speaking to consumer expert Alice Beer about summer holiday essentials.

Alice held up a rope and asked the pair: “What do you think this is? This is more essential than you will know.

“You need this more this year than ever before.”

Eamonn said: “I thought it was reins for the kids or something.”

Ruth added: “It doesn’t look like a washing line to me.”

Eamonn replied: “That’s why I wouldn’t know what it is because I would never use a washing line.”

Ruth hit back: “Oh how sexist.”

Eamonn said: “I’m just saying ‘I’, I’m saying it against me not you. I have no idea. I’ve never hung up the washing.”

That’s why I wouldn’t know what it is because I would never use a washing line.

Eamonn said: “It is shameful. It wasn’t an attack on you. I’m going to [use a washing line] from here on in. I’m a changed man.

“Since lockdown I’m a new man Alice,” as she shook her finger to him.

Viewers were amused by Eamonn and Ruth’s bickering on the programme.

One person said on Twitter: “Love Ruth and Eamonn. They forget they aren’t at home.”

Another joked: “Do Eamonn and Ruth actually like each other?”

Meanwhile, on Monday’s show, viewers were in hysterics when Eamonn said he thinks he deserves praise for cleaning the kitchen.

As the pair tucked into James Martin’s fish cakes in the studio, Ruth said: “You never leave anything on your plate at the end.”

Eamonn replied: “Yes because I was so tired yesterday cleaning that kitchen,” as the crew started giggling.

Ruth told viewers: “As you can tell by the hilarity in the studio, that’s an utter lie.”

Eamonn said: “Who cleaned up after breakfast?”

Ruth replied: “Well you put some things in the dishwasher. You didn’t clean the hob.”

However, Eamonn cut in: “There was a massive amount of things, it took me half an hour.”

Ruth hit back: “That’s because I made a massive breakfast for everybody!”