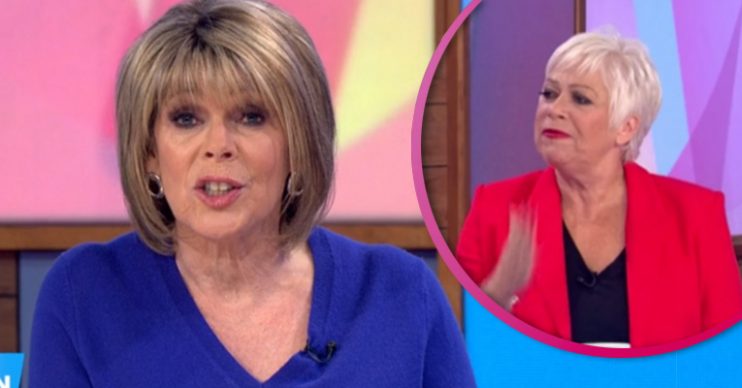 Don't bring racism into everything, they said

The debate whether Meghan Markle has been subjected to racism has been raging up and down the country ever since the Duke and Duchess of Sussex announced they were stepping back from senior royal duties.

On today’s episode of Loose Women (14.1.20) Ruth Langsford and Saira Khan got into a fierce discussion with fellow panellist Denise Welch on the subject.

Read more: Meghan breaks silence on claims she was ‘barred’ from summit at Sandringham

Ruth, 59, and Saira, 49, were discussing the royal crisis when Ruth moved things on and said: “There’s also been made a lot of links between racism towards Meghan.”

“I’ve never said anything about that,” Denise, who has been a staunch defender of Prince Harry and Meghan, replied.

“But now it’s like you can’t say anything about her without being labelled racist,” Ruth told the group, siding with Saira.

Denise then went onto detail the different ways both Meghan and sister-in-law Kate Middleton had been treated in the press.

But Saira hit back and said: “When they went on that private jet, a lot of people were incensed about that, because they said, ‘you’re preaching us about environmental awareness and that, and you’re going on a private jet.’”

Denise then defended them, saying that they had to travel privately.

Saira concluded her argument: “So when the public come out and say ‘you know what I think that’s a bit hypocritical’, they can’t turn around and say to us ‘that’s racism because you’re talking about Meghan in that way’.

We’re talking about you as a couple, because we don’t feel what they did was right.

“It’s not. We’re talking about you as a couple because we don’t feel what they did was right.

“Not everything is [racist].”

The Loose Women panel wasn’t the other daytime TV show to discuss racism with regards to Harry and Meghan today.

Piers Morgan once again clashed with a guest on Good Morning Britain.

The presenter clashed with Dr Shola Mos-Shogbamimu over whether the British media has treated Meghan unfairly since she married into the royal family.

She accused Piers of using his platform to “spout out this personal vendetta with nasty and vile comments”.