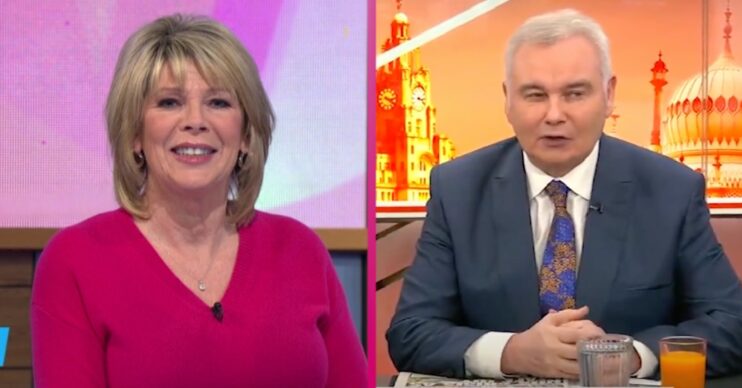 Eamonn, who has just started a new job on GB News, has been suffering with back pain from a trapped sciatic nerve.

The 62-year-old says he has been wobbling around with a walking stick and that Ruth has had to wait on him.

Read more: Eamonn Holmes admits back problems has put a strain on marriage to Ruth Langsford

He told The Sun: “Even my own family are bored of my moaning. It has caused some strain and Ruth is fed up of hearing about it and of me saying I can’t walk the dog or tidy up, but I can’t help it. It’s agony.”

Ruth raised the subject with the Loose Women panel, confessing that Eamonn’s comments made her feel sad.

She said: “Eamonn started his new job this week and because of that he’s been giving a lot of interviews, as you do.

“People have asked about his health because he’s had a really rough year this year.

What did Ruth say about Eamonn on Loose Women?

“Bulging discs in his back, he hasn’t been able to walk properly, it’s transferred down his leg and he’s really finding it hard to walk.”

The This Morning host continued: “He said in this interview, which actually made me feel a bit sad, he said ‘I think my family are a bit fed up with me now.’

“He said ‘The kids are a bit embarrassed about how I move around or don’t move around, and Ruth’s getting a bit fed up with me.’

“You can’t help, but when you’re helping someone all the time and they’re very incapacitated it’s hard to be Florence Nightingale all the time.”

Ruth went on to say that when someone has a chronic illness or injury, it affects everyone around them.

She then jokingly quipped that Eamonn calls her Nurse Ratchet, the sadistic nurse from One Flew Over The Cuckoo’s Nest.

Eamonn and Ruth’s situation is not uncommon

However, Ruth also said Eamonn is struggling with the impact his condition is having on his friends and family.

She said: “I think you feel that maybe you’re a bit of an inconvenience or burden.

“You know, a lot of people don’t want to be a burden on anybody.”

Loose Women airs weekdays at 12.30pm on ITV and is available on ITV Hub