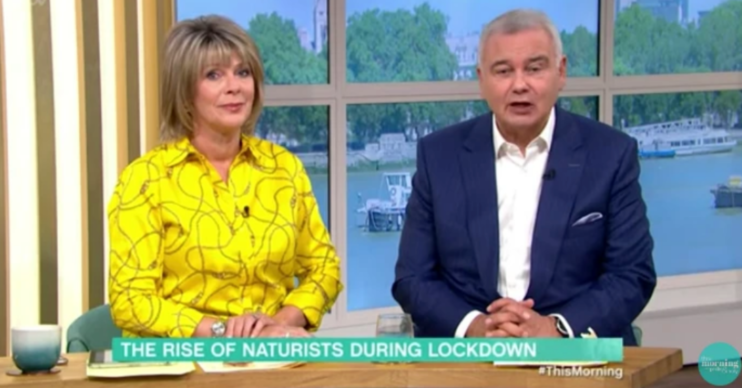 Eamonn Holmes vows to strip off this Sunday after meeting naturists

Viewers were left baffled while watching yesterday’s This Morning (Friday, May 15), when Eamonn Holmes asked Ruth Langsford if she wanted to take her clothes off.

The bizarre moment was actually an introduction to their next segment, which consisted of interviewing a pair of naturists. But Eamonn cheekily made the comments to his wife and co-host, asking if she wanted to strip at the weekend.

The Great British Take Off

Eamonn asked: “What are you doing on Sunday?”

Eamonn replied: “Do you fancy taking your clothes off on Sunday? It’s all the rage!”

And it turns out it is – as we found out from their video interview with guests Georgia and Luke.

He explained his earlier request to Ruth, saying: “British Naturism are encouraging people to bare all for what is called The Great British Take-Off.

“They’re trying to do that to raise money for the British Heart Foundation because lots of people are comfortable with getting their kit off and being more natural.”

Georgia and Luke, from Bristol, went on to tell the hosts about how during lockdown they had embraced their bodies by baring all.

Georgia explained: “I think being at home at the moment is great. It’s a safe environment for anyone to try it if you’re worried about other people. My advice is to give it a go. You’re not going to lose anything.”

British Naturism ambassador Pam Fraser, from Preston, also joined them on the show, to promote the The Great British Take-Off.

What is naturism about?

The virtual festival – which takes place today – invites the public to strip in their gardens, and take part in activities such as yoga on a Zoom chat.

Of course, if you give it a go, make sure you’re not visible to any neighbours.

Pam said: “We have asked the college of policing to have naturism to be known as a lifestyle choice.

“So we can go and wander anywhere, I still personally wouldn’t walk down the high street as I wouldn’t be able to go in any shops.

“Whereas being able to just go for a walk in the countryside or hang around in my back garden in the nude, it just gives me that free time and liberation.”

What do you think of naturism? Leave us a comment on our Facebook page @EntertainmentDailyFix and let us know what you think.