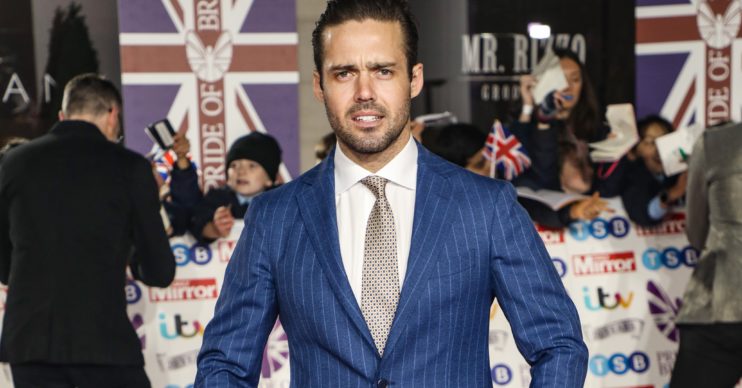 The Former Made In Chelsea star has shaved his head

Spencer Matthews appeared on This Morning today and left hosts Eamonn Holmes and Ruth Langsford stunned by his new look.

Eamonn joked he barely recognised his guest, who was appearing via video link alongside best buddy Jamie Laing.

“We’ll have to point out which one is Spencer,” Eamonn told viewers, “because he looks so dramatically different.”

He then said to Spencer: “What happened?!”

Spencer replied: “I cut my hair off, Eamonn.

“I’ve always wanted that look and feel and I thought what a good time to do it.”

He revealed he had at first attempting the cut himself, before asking wife Vogue Williams to step in and help.

“I did it first on my own,” he said. “There was tufts of hair everywhere, it didn’t look great, so my talented wife had to do it.

Jamie then joked Spencer might need some of the anti-ageing cream the show had been promoting earlier!

Despite Eamonn’s surprise at the change of look, one viewer felt it was a bit OTT. They commented: “He cut his hair, Eamonn. That isn’t hard to work out.”

And other fans were more interested in Spencer’s dodgy wifi connection than they were his hair!

#ThisMorning Did Spencer build his own web cam?

For someone so rich Spencer Matthews’ webcam/internet connection isn’t very good is it? #ThisMorning

#ThisMorning Does Spencer have an internet connection ir is he sending that in via the royal mail?

The boys were on the show to promote their new podcast Six Degrees of Jamie and Spencer, in which they try to use just six phone calls to reach a celebrity.

The first on their hit list is Ricky Gervais.

Jamie also spoke about the prospect of appearing on Strictly Come Dancing this year.

He was part of the line-up for the 2019 show, but injured himself during the live launch and was replaced by eventual winner Kelvin Fletcher.

When asked by Eamonn if he was going to take part this year, Jaime told him he’d accept if asked.

“I’ll sit by the phone and wait. If they come calling this year, I’d love to dance.

Meanwhile, Spencer was asked about the impending arrival of his second child with wife Vogue.

The couple share two-year-old son Theodore and are expecting a little girl in two months.

Spencer said he can’t wait for the new arrival and he is loving being at home more for Vogue’s pregnancy this time around.