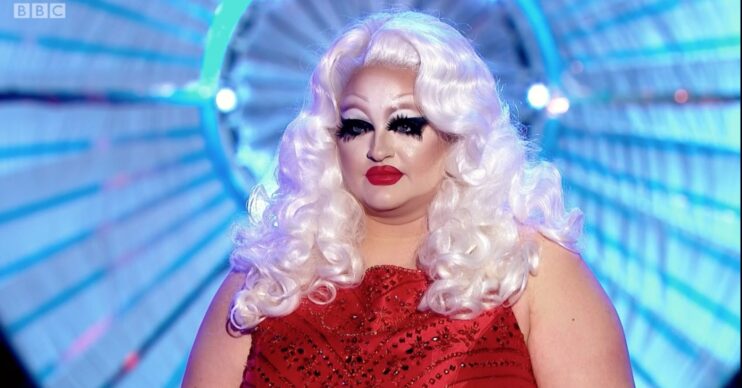 Is she Scone for good?

RuPaul’s Drag Race fans are fearing for the future of Victoria Scone in the competition after she suffered a painful knee injury.

The queen – who is making history as the first AFAB queen to ever participate in the series – started off on the right foot after landing in the top two in week one.

However, during a lip-sync for the win, the queen slid to her knees and hurt herself as she did so.

As a result, Victoria struggled to walk throughout episode two – an exercise-focused ‘Dragoton’ special.

At the end of the episode, after the latest queen sashayed away, Victoria was called to the front of the stage by RuPaul.

There, she was informed she would need to leave the studio in order to be looked over by doctors.

If they didn’t think she would be able to participate, she will have to withdraw.

“Victoria, I applaud you for working through your pain this week,” Ru tells her. “However, your knee injury requires additional evaluation.

“Tomorrow morning, you’ll leave our say, and depending on what the doctors say, we’ll decide whether or not it is safe for you to continue in this competition.

“Now I want you here, but more than anything, I want you healthy. Because if you can’t love yourself, how in the hell are you going to love somebody else?”

What have fans said about Victoria Scone?

Naturally, fans are devastated at hearing the latest development around Victoria, and are wishing her a speedy recovery.

Taking to Twitter, one wrote: “I’m gonna be in my feelings all week until i know Victoria is okay.”

“I simply cannot wait until next week to find out if Victoria’s knee is okay PLEASE,” said another.

“God I feel stressed for Victoria! This is not what she needs when shes hurt her knee! I hope she still kills it,” said a third.

Her fate in the competition will be announced next week.

Has this happened before on Drag Race?

This is the second time that a queen has hurt their knee while participating on Drag Race.

During season nine of Drag Race US, Eureka O’Hara was forced to go home after tearing her ACL during a cheerleading challenge.

However, she was able to return for season 10, and made it to the finale. Aquaria eventually won the season.

Eureka also appeared in this year’s All Stars 6, again making it through to the finale, before being beaten by Kylie Sonique Love.