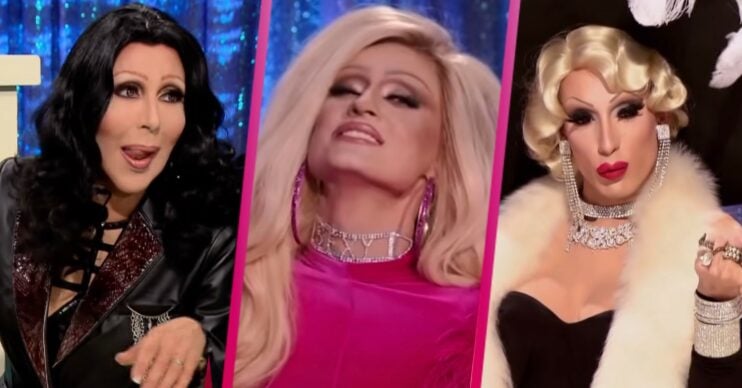 We [blank]ing love this game!

It’s the challenge we’ve all been waiting for… it’s time for RuPaul’s Drag Race UK to take on the Snatch Game.

Based on the Match Game (or Blankety Blank for us British fans), the queens have to tackle their best celebrity impersonations to try and make Ru and the guest judges laugh.

Some moments have truly become defined as iconic, while others… not so much.

Here are our top 10 performances of all time – from any version of Drag Race to date.

This entire Snatch Game was pretty awkward all things considered, with none of the queens bringing their A game and instead creating silence after jokes didn’t land.

The inclusion of Kristen Chenoweth actually on the panel also didn’t help, as the queens weren’t sure whether to interact with her or leave her be.

Everyone that is, except Ben – who brought camp gameshow host Paul Lynde to life with a series of smart remarks, prepared props, and perfect body language.

There’s a reason Ben was the first star to win Snatch Game twice – while her Maggie Smith was just as great, this one being a saving grace in an otherwise lacklustre challenge pipped it to the post.

The moment we heard Bimini declare: “The nipples are the eyes of the face… and you’ve got gorgeous nipples!” we knew Bimini was going to walk this one.

After that, she nailed down her version of Katie Price by turning up her scandalous lifestyle to the nth degree – while somehow managing to also keep its heart and not going too far.

This was a masterclass in how to portray a character – to the point even Katie shared a video afterwards congratulating her on a job well done.

Bimini was the clear winner of this.

The scatterbrained Black inmate of Orange Is The New Black, and the 90+ year old white actress from classic films shouldn’t be easily interchangeable, but somehow Bob made it work, and did it well.

Halfway through the game, Bob traded Uzo – who had been trying to turn model Chanel Iman into her prison wife via the medium of poetry – into Carol, who just seemed happy to be participating even though she wasn’t sure what was going on.

Bob was the first queen to attempt a switch, and remains by far the most successful. We could watch this for hours and not get bored.

When you thought you’d seen everything there is to see with Snatch Game, Gigi’s robot Maria brought us a unique surprise that we loved.

Making the almost-always fatal decision of ignoring Ru’s advice and flat out telling her “thank you for your concern, but I do not share the same concern”, we thought she was setting herself up for a hell of a fall.

Instead we got a foul-mouthed, flirty and slightly clumsy robot who ticked all our boxes.

Even Ru had to admit that she was wrong to be worried – and that never happens.

Ru and Pearl’s relationship was kind of fraught by the time the series hit Snatch Game, but noone can deny – Pearl brought out the big guns with Big Ang.

Turning into a New Jersey Mob Wife, complete with a thick, smoky accent, Big Ang steamrolled over a lot of the other queens with her brash response and dark tan.

Even when she got things wrong, it was oh so right, with everyone cracking up when she declared: “I had a rough childhood OK? I wasn’t watching f***ing Batman and Robin” when she messed up a question about the Caped Crusader.

But for a so-so season, this Snatch Game was a strong one – with Ginger Minj and Kennedy Davenport taking a double win for their Adele and Little Richard efforts.

Our hearts were for Big Ang though.

Not much stood out from this Snatch Game, except Gottmik’s eerily spot-on portrayal of pink party princess, Paris Hilton.

Switching voices the second she realised she was being recorded to the squeaky vocal tone we know Paris for, Gottmik managed to capture how the iconic star has far more going on than her air-headed persona.

She even got a chance to “confront” Raven about her efforts as Paris way back in season two, branding it “f***ing rude” with a $1million smile and the perfect angle posing for the camera.

This was the moment that Jinkx Monsoon entered the game – and she came in fighting.

She was almost instantly dismissed by playing the reclusive Little Edie, the subject of documentary Grey Gardens and by-and-large, an unknown person.

But Jinkx gave it heart, laughs and the most important rule of all, could think on her feet. As a result, all her answers were perfect and left everyone in tears.

Jinkx would go on to win, and Snatch Game was her turning point

This one brought us out of nowhere and injected just the energy we needed into this Snatch Game Of Love.

It was a tough call between Shea and Jujubee in this one, who sat alongside her as the teasing Eartha Kitt.

But Shea had this nailed, from mocking the giant clock the rapper is known to wear, to bringing in his history as the prize of a dating show.

Even coming up with flirting with Juju to the point he offered to ‘bang her in the parking lot’.

However, it was portraying this womanising lothario as a feminist with a secret heart of gold that really tipped it over the edge for us.

These two steamrolled over poor Blair St. Clair, who shot herself in the foot by portraying Ellen, a married gay woman trying to woo a gay man. By the end even she was throwing questions over to Shea and Juju.

There’s a reason that Chad Michaels has made a career out of impersonating Cher – and she proved every inch of it with this performance.

From constantly switching wigs and headpieces, to her having enough of the mania that surrounded her, Cher was iconic and a riot from start to finish.

Alaska’s version of Hollywood icon Mae West was nothing short of iconic. Sexed up, sultry, and so many one-liners up her sleeve we’re surprised the queen could get the dress on.

“Why don’t you come up and f**k me in the a** sometime?” to this day still makes us laugh, and she never once broke character.

And did we ever think Mae West and Bjork was a perfect double act we missed out on? Well, we do now.

Interactive with the guests and the other stars, Alaska had this nailed.