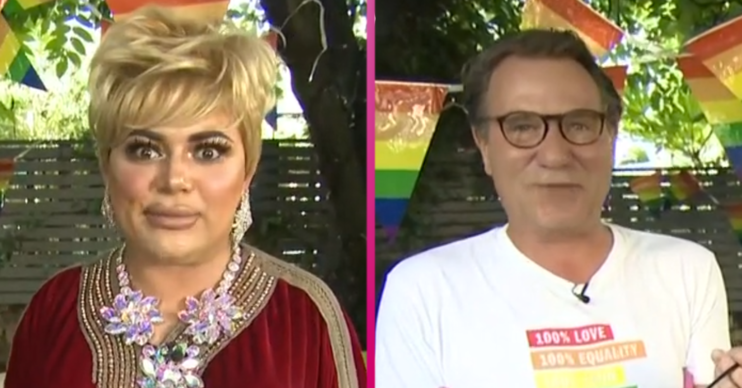 RuPaul’s Drag Race star Baga Chipz made a hilarious appearance on GMB today (June 26). But her adult humour didn’t exactly go down well with everyone tuning in at home. Baga Chipz appears on GMB Chatting to Richard Arnold, Baga Chipz joked about how she traditionally celebrates Pride. She said: “Every Pride, I’m always out in […]

But her adult humour didn’t exactly go down well with everyone tuning in at home.

Chatting to Richard Arnold, Baga Chipz joked about how she traditionally celebrates Pride.

She said: “Every Pride, I’m always out in Soho. I’ve got me drink in one hand, I’ve got my ciggie in the other hand and I’m flashing me tuppence to everyone.

“It’s mad, do you know what I mean? I get the odd grope. But I love Pride. It’s a time where I can get a bit of action.”

The comedian then went on to joke about Love Island.

“All the men would have to put pillows over themselves. It’s shocking. It’s true. They’re only human, dear.”

But after putting on an entertaining performance, she took a more serious tone to pay tribute to the original Stonewall riot protestors who led the way for the LGBTQ community.

“It’s not just a celebration, it’s also a protest,” she said. “If it wasn’t for the people before us, we wouldn’t be able to celebrate Pride.

“So we owe it to them more than anything. Celebrate but also remember those before. us.”

Many of those watching at home praised Baga Chipz’s appearance on Good Morning Britain.

Taking to Twitter, one wrote: “Oh baga you were fabulous darling xx.”

Another then added: “You have made my day x.”

Moments later, a. third tweeted: “Made my day! Happy Pride!”

But unfortunately, there were some who decided to focus on criticising Bags Chipz’s sense of humour.

One commented on Twitter: “@ChipShopBird on #gmb just said she loves to be covered in Daddy’s sauce. It’s 8.12am!”

Another added; “Certainly far too early for Bags Chipz. What a strange person.”

Moments later, a third wrote: “Covered in Daddy’s sauce Showing off my tuppence Bit much #gmb.”

Shortly after, a fourth commented: “WTF is this idiot doing on breakfast TV with the lewd comments #gmb.”