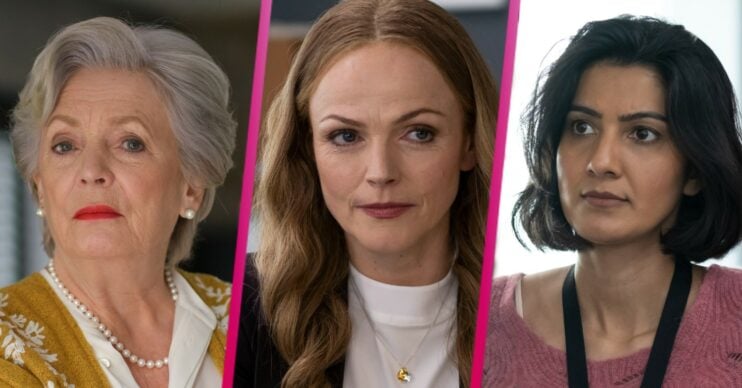 Rules of the Game on BBC One: Who is in the cast alongside Maxine Peake?

Rules of the Game promises to be THE next big thriller on BBC One this year – and the cast is as good as you could hope for.

Maxine Peake, who recently put in a heartbreaking performance in ITV1’s Anne, stars in the four-part series.

But who else is in the cast of Rules of the Game alongside the famous Manchester-born actress?

Here’s everything you need to know about the cast of Rules of the Game.

Read more: What’s next for Maxine Peake after Anne? Actress stars in BBC drama Rules of the Game next week

Maxine Peake plays top executive Sam in the Rules of the Game episodes, which delve into sexual politics in the modern workplace.

Sam investigates when a brutal death takes place within her company – and it’s not the first tragedy at the firm.

Chief Operating Officer Sam has the unpleasant job of unpicking the events that led to the death.

The excellent Maxine Peake is perfectly cast as Sam Thompson – the ruthless boss of the family firm of sportswear.

She instantly clashes with new HR director Maya (Rakhee Thakrar), and soon all kinds of company secrets start to emerge.

Sam faces questions from the police, and finds herself pulled in all directions.

Dinnerladies viewers will know the 47-year-old as Twinkle.

Most recently, she’s played Sara Rowbotham in Three Girls, Sadie in The Bisexual, and Bella in Black Mirror.

When Maya queries the work culture at Fly, boss Sam is adamant that nothing needs to change.

She insist that Maya’s focus should be on the upcoming stock market floatation.

However, when an employee of Fly recalls the historic toxic behaviour at the company, Maya is shocked and becomes determined to uncover the truth…

Rakhee, 37, was most recently seen as Mia in The Girl Before on BBC One.

Sex Education fans will know her as Emily Sands in the comedy-drama.

She has also played Fatima in the TV series Four Weddings and a Funeral, Simran in Cloud 9, and Sarita Dubashi in Holby City.

Of course, EastEnders fans will know her best for playing Shabnam Masood in the BBC soap from 2014 to 2016.

Rakhee will soon star in the upcoming film Wonka, a prequel to the famous Roald Dahl book Charlie and the Chocolate Factory.

Alison, 75, has been on our screens for more than four decades and seems to get better with age.

Significant roles include Mrs. Bennet in the TV adaptation of Pride and Prejudice, Betty Simpson in Fat Friends, and Rose in The Syndicate.

She’s also known for her role as Edith in Hold the Sunset, Pam Shipman in Gavin & Stacey, and – most recently – Gail Reynolds in Life.

Alison has an impressive film career, too, having starred in several memorable big screen offerings like Mike Leigh’s Life is Sweet, Topsy Turvy and Dad’s Army.

She is called to investigate when someone dies in tragic circumstances in Rules of the Game.

Actress Susan, 34, made her TV debut at 14 years old as one of the eight children selected for CBBC’s Serious Jungle.

At 18, she landed her first professional acting role in the BAFTA award-winner That Summer Day.

Susan made her film debut in Half of a Yellow Sun in 2013, and appeared as Cynthia in the E4 comedy hit Chewing Gum, and Raquel in Crazyhead.

More recently, she has played Mabel Wisbech in Year of the Rabbit, Sabrina in Dark Money, and Helen in Truth Seekers.

She starred as Edith in the film Enola Holmes, and will reprise the role for the upcoming sequel.

Rules of the Game cast – who plays Tess Jones?

Britannia’s Callie Cooke portrays troublesome Tess Jones, who is caught having sex in the office toilets on CCTV.

She’s clearly hiding something, as well as trying to process the death of a colleague.

Actress Callie has appeared in the likes of Doctors, Strike and Overshadowed.

She’s best known for playing Natalie Markham in Informer, Kimberley Doyle in The Stranger, and Nadia in Adult Material.

Actor Ben Batt, 36, portrays Owen Jenkins in the cast of Rules of the Game.

Meanwhile, Shameless viewers will know him as the villainous Joe Pritchard in the Channel 4’s comedy drama – so he’s worked with Maxine Peake before!

As well as TV roles in Casualty, Lewis, The Promise, Sirens, and The English Game, Ben has also had many smaller roles in films such as in Captain America: The First Avenger.

In season three of Jamestown, Ben played Willmus Crabtree, a mysterious trader from England with his motives and intentions unknown.

He also played Blue in three episodes of Our Girl.

Rules of the Game cast – who plays Gareth Jenkins?

Actor Kieran Bew, 41, plays Gareth Jenkins in Rules of the Game on BBC One.

He’s known for his work across film, TV and theatre.

Kieran is perhaps best known for playing the part of Ian in ITV series Liar.

Zoe recently played Kate Saunders in The One, Katy Sutcliffe in Liar, and Betsey Granger in Grantchester.

Rules of the Game cast – who else stars in the BBC One thriller?

She stars as Carys Jenkins, while The Duchess actor Rory Keenan stars as Hugh Evans.

Are you excited about watching Rules of the Game on BBC One? Leave us a comment on our Facebook page @EntertainmentDailyFix.