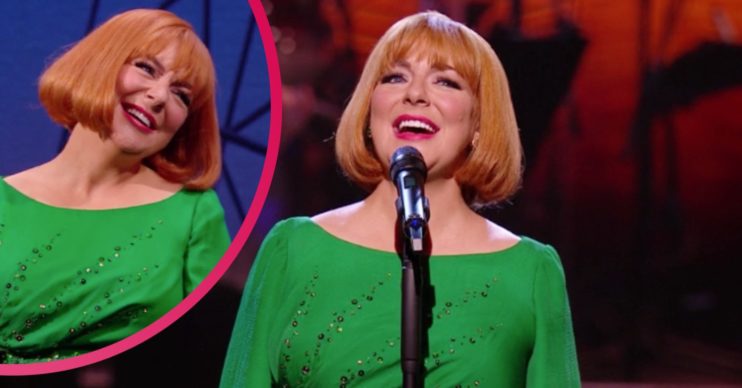 Sheridan previously played the star in the ITV drama Cilla

Sheridan Smith left viewers in flood of tears as she reprised her role as the late Cilla Black at the Royal Variety Performance.

The 39-year-old actress stunned fans as she transformed into the You’re My World singer, who she previously played in the ITV drama Cilla.

Despite taking place without a studio audience for the first time ever, Sheridan still went on to impress viewers at home.

Royal Variety Performance: What did viewers think of Sheridan Smith?

Sheridan was introduced by host Jason Manford, as she took to the stage in a long green dress and a red wig.

The West End star, who took on Cilla in the 2014 ITV series, was joined by a band for the performance.

And fans were left stunned by Sheridan’s version of the 1965 track.

Taking to Twitter, one wrote: “Sheridan Smith was amazing on the ITV drama about Cilla and it was so good to hear her sing those well-known numbers again.”

A second said: “The best performance I’ve seen from anyone in a long time.”

“A powerful and emotional performance… I have tears rolling down my face. Great to see her back and packing a punch.”

A third wrote: “What a fantastic performance Sheridan! I’m sure Cilla was applauding from above.”

A fourth shared: “Loved the performance by Sheridan Smith tonight. She always lights up the screen and her portrayal of Cilla is simply superb. Thanks Sheridan.”

Brilliant performance of ‘you’re my world’ by Sheridan smith at the royal variety but husband and I are in floods of tears as it was played at my mother in law’s funeral last year. What a moving song 😢😢😢 #sheridansmith

The best performance I’ve seen from anyone in a long time. @Sheridansmith1 being Cilla on the RVS. A powerful and emotional performance…I have tears rolling down my face 😢 Great to see her back and packing a punch 👏🏻 #royalvariety #sheridansmith

This year’s Royal Variety Performance returned to Blackpool with a virtual ceremony amid the COVID-19 pandemic.

Ahead of the show on ITV, Sheridan cuddled up to her baby son Billy as she snapped a selfie on Instagram.

The actress told her followers she had dedicated the track to little Billy, who she welcomed with fiancé Jamie Horn in May.

Alongside a clip of the two together, Sheridan wrote: “My world. Tonight I’ll be singing You’re My World as Cilla on @itv for @RoyalVariety at 8pm. This is the little man I’m singing it for.”