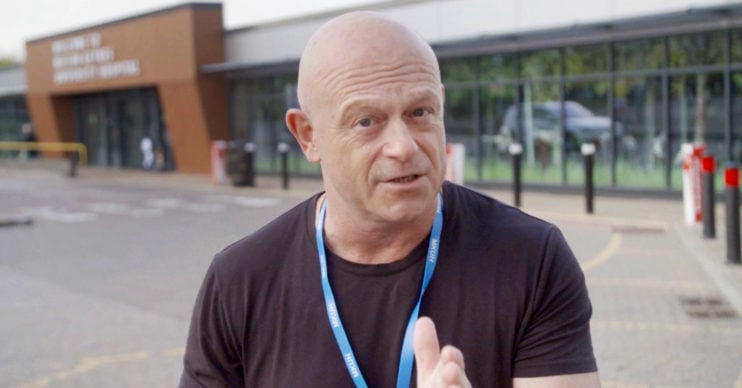 The former EastEnders actor-turned-documentary-maker was invited to Milton Keynes University Hospital Trust to witness first-hand how they are coping with the coronavirus pandemic.

Ross visited the hosptial where he spoke with staff including doctors and nurses all fighting on the frontline.

Read more: The One Show viewers insist show isn’t ‘essential’ and should be taken off air

He wore vital PPE to protect him from the illness.

Life on the frontline

Those he spoke to heartbreakingly told him the hospital was effectively on a war footing.

They also explained why staying at home saves lives, and expressed their concerns about what decisions they may have to face if the hospital becomes overwhelmed.

Many viewers at home called it ‘important’ viewing and said it had reduced them to tears.

#RossKemp As an exICU Nurse, I found this documentary heartfelt and informative to the general population who have no idea what goes on in an ICU department. Well done Ross and your ‘team’.

Now all these rants about the #RossKemp documentary. It’s heartbreaking that families can’t visit there loved ones, it’s awful. But you can’t compare the two. If everyone was allowed to visit this virus would continue. He is one man, and potentially a camera man too.

#RossKemp There are two sides to this. Whilst I understand the frustration of family not being allowed to see their loved ones, journalisms and documentary film making in vital. People need to see the reality of what’s going in the hospitals. The public will more cautious

Just watched the #RossKemp #NHS documentary. Aside from any controversy, I found it moving and thought provoking. Like our young men going to war in 1914 and 1939, the NHS heroes are on the frontline now fighting an invisible enemy. ❤️

#RossKemp
Hi Ross I watched your documentary on ITV Thursday evening and dare I say it brought massive tears to my face I could not help but cry for love nor money. And you did an amazing Job on the programme .
Regards Joe Millen from Preston Lancashire.

#RossKemp very insightful programme tonight inside ICU. If watching it doesn’t keep people in, nothing will. The public needed the shock and reality of this virus #CoronavirusLockdownUK #bbcnews

However, others believed it was a totally unnecessary programme to have aired.

They insisted it was unfair that Ross should have been allowed on wards when families were up until this week being denied the right to say goodbye to loved ones.

As a frontline healthcare worker I think it’s an utter disgrace that #RossKemp has been allowed to film a, let’s face it, voyeuristic documentary on Covid-19 when families are being torn apart and their loved ones are dying alone. Shame on @ITV for broadcasting too 👎🏻

No, the disgusting ghoulish thing is a disgrace #RossKemp

Disgrace on you. When our front line workers are saving lives you want to make a documentary about it. Seriously get another job. I use to love you in Eastenders but now I have absolutely no respect for you #RossKemp

I’m sorry i know he trying 2 raise awareness what is happening in the intensive care wards of COVID-19, but i think it is totally unfair he is allowed in when family members can’t go in & say bye 2 loved ones in their last moments #RossKemp

# #RossKemp what is a soap actor doing filming in an ICU? Peoples’ family are dying & he’s wandering round with a camera. Does he have their permission or that of their families to film them? He shouldn’t be anywhere near when relatives can’t hold the hand of their dying relative

#RossKemp people are having to watch their loved ones die and they can’t get near them to say their goodbyes so how an earth is Ross Kemp cruising in their with his film crew in anyway morally acceptable, It is wrong on so many levels #heartless #tasteless #zeroempathy

In response to the criticism, ITV stated that only one cameraman was permitted with Ross and they filmed for a short period of time, less than 30 minutes, in the Intensive Care Unit.

They also revealed the PPE that Ross and the cameraman wore was replaced by the production team, so no NHS supplies were diminished.

It was concluded that the safety and privacy of everyone involved was “paramount” to the production and consent was obtained from both staff and patients.

Read more: Government reveals targets that must be met before lockdown is lifted

Furthermore, Milton Keynes NHS Hospital Trust has addressed concerns of viewers in a statement on their website.

They explained why they agreed to the filming.

“We agreed to undertake the filming to contribute both to the documenting and reportage of the work of NHS staff during this national emergency; and to reinforce NHS and Government advice to help limit the spread of the Coronavirus to as many people as possible.

“We believe Ross Kemp will reach a wider viewer demographic than some traditional news programmes and will therefore help these important messages reach more people.”

The statement also explains visiting restrictions and the use of PPE equipment by Ross and his crew.

Did you watch the documentary? Leave us a comment on our Facebook page @EntertainmentDailyFix and let us know what you think of this story.