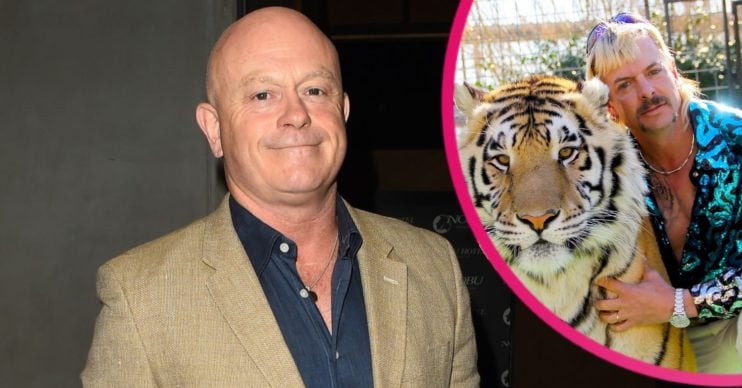 The show will air later this year

Ross Kemp is reportedly working on a Tiger King-style documentary for ITV.

The 56-year-old investigative journalist is taking inspiration from the popular Netflix series, which follows controversial big cat owners in the US.

In his own upcoming documentary, Ross is set to feature the British versions of Tiger King’s Joe Exotic.

The upcoming series has been given a tentative title of ‘Ross Kemp Meets Britain’s Tiger Kings’.

A source told The Sun: “No one has really delved into the lives of British Joe Exotics and what possesses them to keep these creatures in the way they do.

“There are numerous examples of Brits having all sorts of animals, and this doc will look at some of the characters involved.”

The 60-minute episodes are apparently set to air later this year.

Who has Ross interviewed?

Reece keeps two rescued African lions and a puma in his garden in Nottingham.

Speaking up to The Nottingham Post, the cat lover confirmed he met up with Ross in October.

He added: “I only gave a little interview.”

ED! has contacted Ross’ rep and ITV for comment.

What else has the actor been up to?

The actor – who played Dame Barbara’s on-screen son Grant Mitchell – wrote a gushing eulogy to the former Carry On star.

In the eulogy, obtained by The Sun, he revealed that Babs “had time for everyone” and loved her fans as much as they loved her.

In addition, he said: “She was a diplomat who could walk with queens and princes, gangsters and politicians, but she never lost the common touch.”

Revealing the last words his friend said to him, he explained: “[Scott, Barbara’s husband] rang me on a Sunday afternoon and she just turned round to me and said, ‘I just want everything to be good for you in your life’.

“And that is something that will stay with me for the rest of my life.”

Furthermore, he shared: “She was a genuinely good person. She was so lucky to have Scott… they truly, truly loved and cared for each other deeply.”