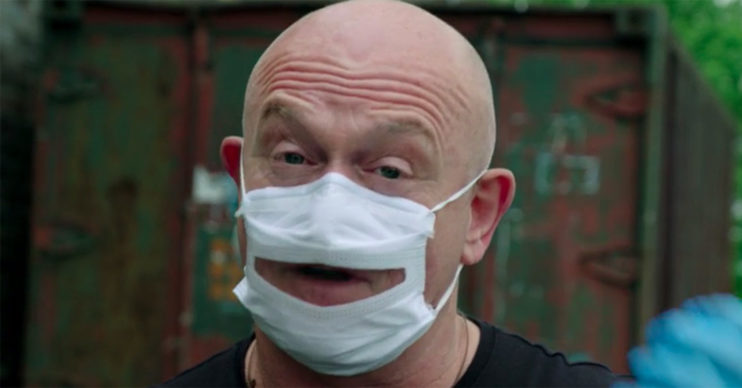 The actor turned documentary presenter, 55, donned a very unusual face mask indeed for the latest episode of his series Ross Kemp Living With.

In this episode Ross interviewed those living with crippling painkiller addictions.

Despite the hard-hitting nature of the doc, viewers appeared more distracted by his face mask.

Due to the coronavirus pandemic, Ross wore a face mask throughout much of the episode.

Read more: Bruno Tonioli gives his blessing for Cheryl to replace him

However, it appeared as if the mouth part had been cut out.

But on closer inspection it was actually clear plastic – which allowed the cameras to capture his mouth moving as he spoke.

Nevertheless, viewers flocked to Twitter to both mock and query the unusual face mask.

One user tweeted: “Why has #rosskemp got his mouth exposed?”

Another user asked: “WTF Ross. That mask is pointless.”

Although the mask may have looked rather odd, it will have allowed hearing impaired viewers to lip read his speech.

This very powerful painkiller can lead to addiction – and even death by overdose.

Many viewers revealed on Twitter that they had been prescribed the drug – and worried of its addictive properties.

“I had fentanyl immediately after an operation”

One user tweeted: “My doctor dishes fentanyl patches out to me like they are sweets.

“I’ve waited 10 months now for a scan. No idea when that will now be. Until then, more patches. I understand why people get addicted to these. Not good. #RossKempLivingWith.”

Another user shared: “I had fentanyl immediately after an operation and I can definitely understand why you would get addicted to it #RossKempLivingWith @RossKemp #LivingWith.”

And a third posted: “There needs to be a lot more education on this subject. People are being prescribed these highly addictive drugs without being made aware of the risks!#RossKempLivingWith.”

Meanwhile Ross himself shared his own experience with painkillers.

In view of his some 206,000 Twitter followers, he tweeted: “I have had an operation and been prescribed morphine and it is hard coming off it trust me #livingwith #RossKempLivingwith.”

What do you think of Ross’ mask? Share your thoughts with us on our Facebook page @EntertainmentDailyFix.