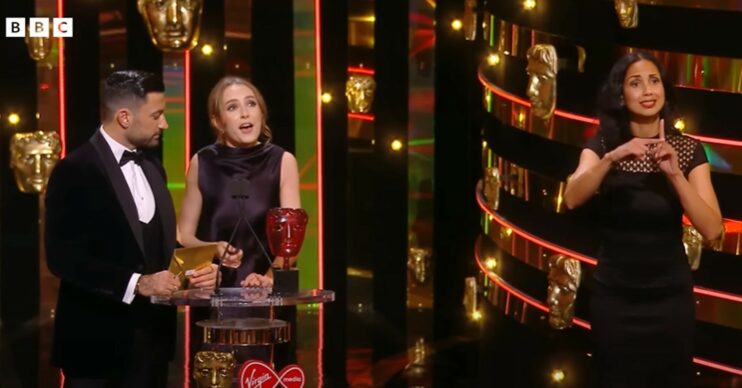 Rose Ayling-Ellis couldn’t hide her emotion when she and Giovanni Pernice bagged a BAFTA for their silent Strictly dance.

The beautiful dance was one of the most emotional scenes in the BBC series’ history and now it’s been recognised at the top level.

EastEnders actress Rose, 27, was Strictly’s first deaf contestant and used the show as a platform to inspire.

Throughout the series she wowed the judges with her extraordinary ability.

But it was her silent routine with Giovanni which was truly spellbinding.

The couple were dancing to Zara Larsson and Clean Bandit’s song Symphony.

In the middle of the performance, the music was cut off as the couple continued dancing, offering viewers an insight into Rose’s world.

The Strictly judges and audience were stunned, with many commenting on the showstopper on social media.

Accepting the award, Rose said: “It is a very special moment for us because hopefully it showed how powerful TV can be, where it has actually introduced changes. It has even helped the BSL (British Sign Language) law be passed recently.

“We have still got a long way to go but it is such a great start. We are so, so, so proud of it,” as she got choked up.

Giovanni added: “When we first thought of the idea to put silence into the dance, we knew it was going to give an impact, but this went bigger than what we thought.”

When they first performed the beautiful dance last year the Strictly judges and audience were overcome with emotion.

Giovanni learnt sign language for Rose and said the routine would stay in his heart forever.

Posting a pic of the pair on Instagram, he wrote: “A moment that will remain forever in my heart️. You really are a ROLE MODEL.”

Not only did Rose break records on Strictly, she’s also made history on CBeebies.

On Sunday (May 8) the actress signed the popular bedtime story programme.

The story was written by Raymond Antrobus, and follows the journey of a son and father as they discover and manage deafness.

It is the first ever BSL-signed story on CBeebies in which Rose only spoke twice throughout the entire show.

Speaking ahead of the programme, Rose said: “I am super excited to read my first CBeebies bedtime story in British Sign Language and it’s even more wonderful to share a story written by a deaf writer.”

Show your support for Rose on our Facebook page @EntertainmentDailyFix.