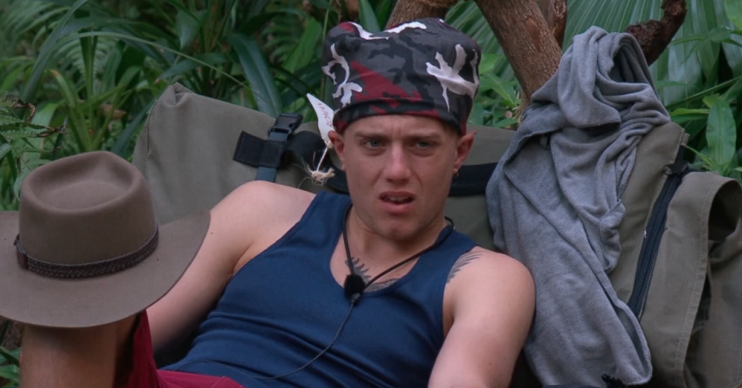 He also opened up about his parents' friendship with George Michael

Radio DJ Roman Kemp moved his I’m A Celebrity campmates and viewers at home as he spoke movingly about his parents this evening.

The 26-year-old also opened up about his parents’ long and happy friendship with late singing star George Michael – who was Roman’s godfather.

But it was his stirring tribute to Spandau Ballet dad Martin Kemp that visibly moved the likes of Kate Garraway, Nadine Coyle and Myles Stephenson.

“My dad is my best mate, 100%. I speak to him every day,” Roman told his celeb pals as they rested in the jungle camp.

Roman came to visit us in the studio! #InTheSwingOfIt

Amusing everyone with claims 1980s pop icon Martin was recruited into the band by his brother Gary after being instructed to do so by their mother, Roman joked his dad could neither play an instrument or sing at the time.

“Still can’t. He still hasn’t realised his mic wasn’t on for Live Aid!” he quipped to laughter from the others.

But Roman’s sensitive side was soon on display as he recalled the impact that brain surgery to remove brain tumours had on Martin in the 1990s.

He explained: “When they went back out on tour, post brain tumour, he forgot everything. So I had to learn all the Spandau songs and then taught him them again.”

Looking emotional, Roman reasoned: “How can my dad not be my hero, for all of that?”

And despite being thousands of miles away, his parents were obviously feeling the love.

Martin tweeted during the show: “So proud of my boy… Shirlie [is] tearing up here!”

TV presenter Kate, who admitted to be a huge fan of Spandau Ballet and had posters of the band on her wall at the time, later praised Roman for his deep and caring appreciation for his family.

Describing him as shy and private, she continued: “Not that he’s ashamed of it, he loves his mum and dad.

“But he’s quite private because he’s got his own career and his own life… and how extraordinary it must have been, to be in that environment.”

Viewers were also touched by what Roman had to say.

“Just when I didn’t think I could love @romankemp anymore 😍❤️,” tweeted one.

A third wrote: “Omg. So moving. Love this lad. So genuine.”

Roman was also thoroughly captivating as he explained how protective – and competitive – his godfather George could be.

“He was an amazing guy. He was my uncle. You’d see him at dinners, Christmas, the lot,” Roman said.

Roman continued: “It is really nice that all the memories I gave are so nice, going on holidays, and having my parents compete with Christmas presents against him.”

He added: “One year my dad bought me a bike, a Raleigh bike.

“I remember George came to the house and brought in my present… And he’d gone to Harrods and bought one of those electric cars… but not just that, it was a Batmobile! I’ve still got it.”

Roman went on to reveal how his mum, former Wham! backing singer Shirlie Holliman, was chaperoned by the Careless Whisper star for her first date at a gig with Martin.

“My mum didn’t want to go on her own!” Roman recounted.

“My dad said he spent the whole date trying to get rid of him!”