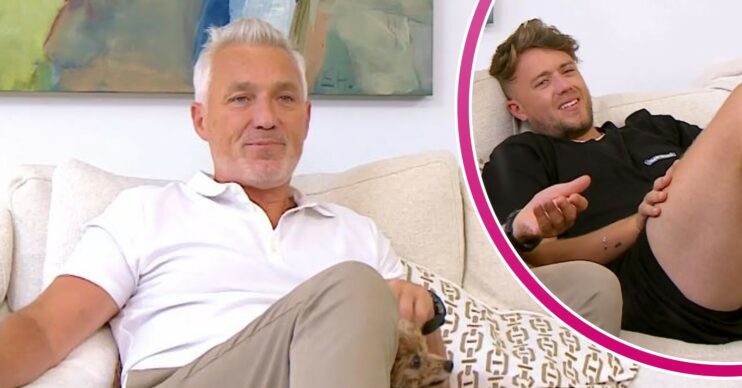 The father and son duo were back for another episode on Friday night and they didn’t disappoint.

As the pair watched an episode of Netflix’s How To Build A Sex Room, Martin made a shock admission to his son.

Martin admitted: “I don’t want a room that’s dedicated just to sex. Why can’t you have sex everywhere?”

Roman screwed up his face and replied: “Well you don’t have… oh gross.”

Martin continued: “But you do… me and mum, everywhere.”

Roman seemed to have heard enough at this point as he said: “Oh that’s disgusting.”

Martin carried on, saying: “No, we do, everywhere around the house. There’s not like a special room.”

Roman then got up and walked out of shot as he said: “No because I’m sitting on the sofa.”

Viewers were in hysterics over the moment on Twitter.

A third added: “My thoughts exactly! The whole house should be ideal for sex whenever you feel like it.

No, we do, everywhere around the house.

“@Shirliekemp is going to kill you for revealing your secrets & poor @romankemp is never going to sit on or touch anything in the house ever again! Lol!”

However, others weren’t impressed as one said: “Oh come on Martin. Keep this to yourself would you.”

Another tweeted: “I’ve gone off Martin Kemp,” followed by a throwing up face emoji.

Elsewhere on the show, Martin divided viewers with one aspect of his appearance last night.

As he and Roman watched TV, Martin put his feet up on the table and he wasn’t wearing socks.

Some viewers took issue with his bare feet being on display as one said: “Can’t bear the feet on the table next to the Doritos… even Martin Kemp’s feet!”

Another wrote: “Someone needs to tell Martin Kemp to keep that foot of his out of sight.”