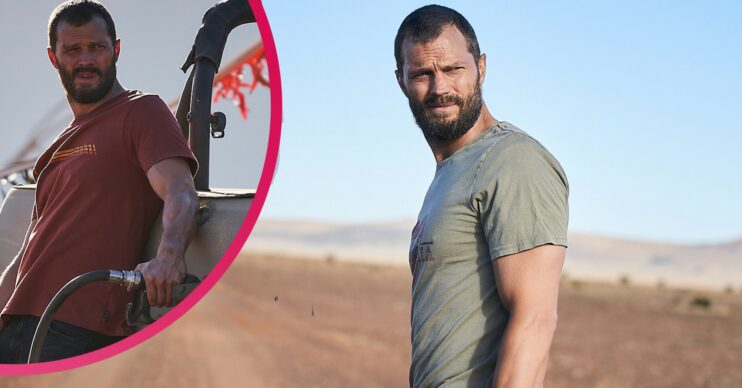 Going to miss The Tourist? Here are four roles where you can get your Jamie Dornan fix

Viewers of BBC One drama, The Tourist, will need other Jamie Dornan roles in their to get their fix now the final episode has landed.

While we wait to hear if there will be another series following Elliot Stanley’s adventures, here are some of JD’s best roles to plug that gap.

Don’t say we’re not good to you.

Catch Jamie Dornan in Once Upon A Time

Read more: Five things we need cleared up in the final episode of The Tourist

Jamie appeared in the first series of Once Upon A Time, a US drama featuring characters from well-known fairy-tales. Jamie plays The Huntsman, of Snow White and Little Red Riding Hood fame, and the parallel role of Sheriff Graham Humbert . The show switches between the real world and the fantasy world of fairy tales. Tip – episode seven for maximum Jamie.

Jamie Dornan appears for the entire first season which is available on Prime Video.

Jamie Dornan on the run from Gillian Anderson in The Fall

Aside from the movie trilogy that Jamie doesn’t like to be asked about, his role in BBC drama The Fall is his best known. He plays Paul Spector, a serial killer who manages to hide in plain sight. Gillian Anderson is the police officer charged with his case. It’s a brilliant cat and mouse chase which ends with a disturbing twist. And it isn’t just the questionable feelings you’ll develop for a psychopath. Tip – don’t watch alone.

All three seasons are available to stream on BBC iPlayer.

Back to fairy tales now and to Sherwood Forest we go. Jamie starred as Will Scarlet – half-brother and general thorn in the paw of Robin Hood (Taron Egerton) in this 2018 version. Sadly, the movie didn’t go down well with critics with one saying it ‘robs you of two hours’. We don’t think two hours of Jamie could ever be called ‘wasted’ though. Tip – forward through the non-Jamie bits.

Robin Hood (2018) is available to rent or buy on Prime Video.

Not a major part but still one worth watching is Jamie as Count Axel Ferson. He stars alongside Kirsten Dunst who plays the ill-fated queen. Ferson is one of her lovers. The movie is from 2006 and stars a clean-shaven and fresh-faced Jamie Dornan.  Tip – watch out for Steve Coogan too.

Marie Antoinette is available to rent or buy on Prime Video.

And obviously you can watch Jamie in the Fifty Shades trilogy which are all available on Netflix.