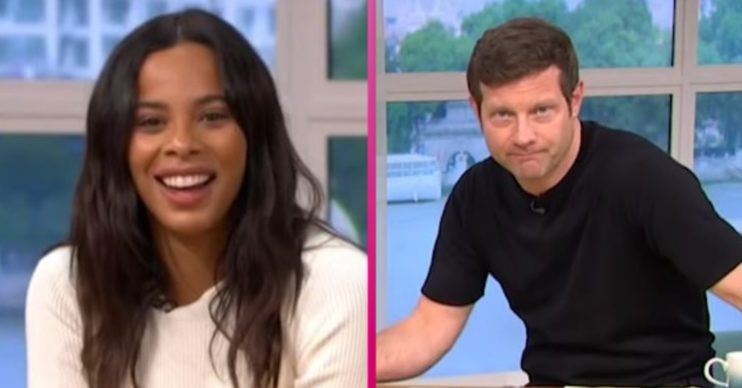 The Saturdays star howled in the background

Rochelle Humes was in hysterics today on the set of This Morning with Dermot O’Leary.

The former Saturdays star, 31, was joined on the ITV daytime show today (Friday, August 28) by the 47-year-old X Factor presenter.

The pair were covering for Eamonn Holmes and Ruth Langsford, who have been presenting from Monday to Thursday while regulars Phillip Schofield and Holly Willoughby enjoy a summer break.

What did Rochelle Humes and Dermot O’Leary get up to on This Morning?

After their episode was over, Dermot took to Instagram to thank Rochelle for working with him – and fans for watching – as he had a “blast”.

Posting two snaps of himself on Instagram dancing in the This Morning studio, he wrote: “Shimmying and stumbling out of my last @thismorning for the summer.

“Had a blast with @rochellehumes. Thanks for watching.”

Shimmying and stumbling out of my last @thismorning for the summer. Had a blast with @rochellehumes Thanks for watching. Clobber role of honour: @thom__sweeney @johnsmedleyknitwear @prada @iwcwatches_uk Styled with aplomb by the dashing @styleanderror x

He followed the post up with an ‘outtake’ of his dance efforts, which were so frenetic they risked wrecking the set.

In the short video, Dermot moves towards the couches with his leg raised – only to bring his foot crashing down on a side table, causing it to flip on its side and knocking over a pineapple ornament.

“Take one…” he wrote alongside it.

In the background, Rochelle howls with laughter at Dermot’s antics.

In a second clip, the BBC Radio 2 presenter successfully lands after pulling off what looks like a star jump.

Read more: Holly Willoughby reveals her excitement at being reunited with Phillip Schofield on This Morning

“And… take two,” he captioned it, tagging Rochelle and the This Morning Instagram page.

In the comments, one follower said: “What are you like.”

Can definitely tell you two had fun this morning on the show.

Another laughed: “Great show. Dermot, can you stay still for two minutes?”

A third put: “Can definitely tell you two had fun this morning on the show.”

Someone else said: “Love your enthusiasm.”

He joined Alison Hammond, who usually works as This Morning’s entertainment reporter, on the couches.

Those watching at home felt divided over the pair as a presenting duo. Some thought they were the “perfect” combination with great “on-screen chemistry” – and even called for Dermot to be on every week.

Others weren’t quite as impressed, with some claiming the collaboration “wasn’t working”.