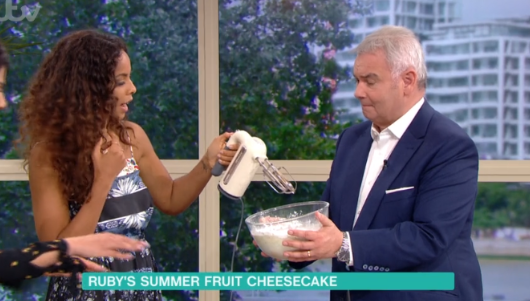 Rochelle Humes has joked she’s going to have to foot Eamonn Holmes‘ dry cleaning bill after inadvertently coating him in cheesecake mixture on Monday’s This Morning.

The incident happened during a baking segment as the pair filled in for Phillip Schofield and Holly Willoughby on the bank holiday edition.

As former Bake Off star Ruby Bhogal showed the pair how to make a strawberry cheesecake, Rochelle had trouble using an electric whisk.

First of all, Ruby had to get her to use it on the worktop – rather than while Eamonn held the bowl aloft – to prevent it going everywhere.

But The Saturdays’ singer still ended up showering her co-host in the baking mix as she struggled to control the device.

“Oh, for f’s sake! Blooming suit is ruined now!” Eamonn exclaimed as he dived for cover.

“I’m so sorry!” a mortified Rochelle apologised as Ruby took over to show her how it’s done.

“I knew that was going to happen!” she laughed, as Rochelle had previously told her she’s no master chef, having once mixed up sugar and salt when baking.

As she shared an image of herself in the floral print dress she wore for the show, one of her followers wrote: “The whisk! Eamonn not amused” with laughing face emojis.

Others thanks Rochelle for brightening up their bank holiday with her baking error.

“I haven’t laughed so much in ages,” one told her. “Laughing at the whisk,” said another.

“So funny this morning,” a third agreed.

It wasn’t just the cookery segment that amused viewers.

They were also in stitches over Eamonn attempting to talk to trees as he interviewed a woman who claims to do just that.

Were you entertained by today’s This Morning? Leave us a comment on our Facebook page @EntertainmentDailyFix and let us know what you think!