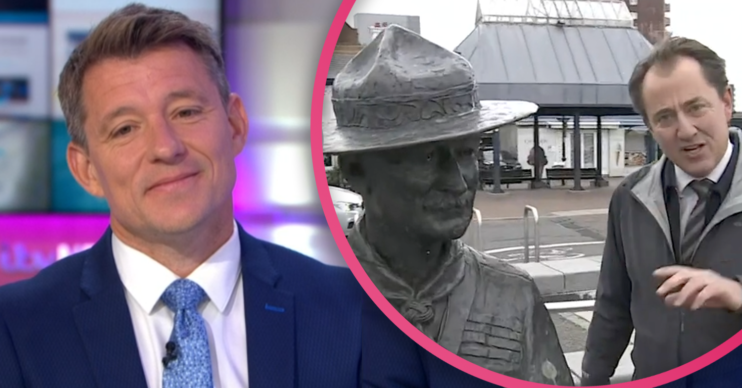 The statue in Poole Harbour was installed in 2008

A statue of Robert Baden-Powell is set to be taken down today (June 11).

The decision to get rid of the monument honouring the Scouts founder sparked a huge debate on Good Morning Britain, dividing viewers.

He said: “This man helped millions across the globe…I was a member of the Scouts and it helped me.

“This morning, right-minded people will be concerned that there is a list of 60 or more – I even heard up to 400 – statues that can be pulled down across this country.”

Steve added: “They’ll start to be slightly frightened that there is a movement out there seeking not only to rewrite history but rewrite history in their terms and their language.

“That is not the language of the British people.”

The ex UKIP member continued: “Allowing monuments to remain doesn’t legitimise the views on slavery – it certainly doesn’t for someone like me who is mixed race.

“If we’re going to remove things we find distasteful because it represents slavery or murder or rape then we’re in a deeply slippery slope.

“We’d have to level Bath because of the amount of rape, murder, torture and slavery that the Romans did.”

Questions should be asked

However, former special advisor to Theresa May, Nero, disagreed with Steven.

“This doesn’t need to be a polarised conversation,” he stressed. “We can have a sensible conversation.

“I think it’s wrong to say that there are people in Britain who will be waking up thinking when does this stop.

“It’s British people having this conversation.”

Nero explained that given Powell’s views on Nazis, homophobia and racism, there are “legitimate questions to be asked”.

GMB fans were divided over the move to tear down the Robert Baden-Powell state in Poole.

Should controversial statues be removed?

Former adviser to Theresa May @neroughwujabo says removing statues should be considered on the basis of whether we would honour them today.

He says it's not about rewriting history. pic.twitter.com/yg7PiOVTJD

Taking to Twitter, some agreed it was the right decision: “It’s not about rewriting history. Its about doing the right thing. This guy is ridiculous.”

Another added: “Should the statue of @scouts. founder Robert Baden-Powell be removed? Yes, absolutely. To a museum in Poole where a full account can be given of him, together with his fascist support.”

However, others felt strongly that the statue should remain.

“Statues should be left where they are and our history – good or bad – should be taught to our future generations,” one viewer tweeted.

Shortly after, a second added: “Rather than remove these statues, add a web link to each statue which will allow the public to find and read the whole story behind each one and let people form their own opinions.”

What do you think should happen to the Robert Baden-Powell statue? Visit our Facebook page @EntertainmentDailyFix and let us know what you think of this story.